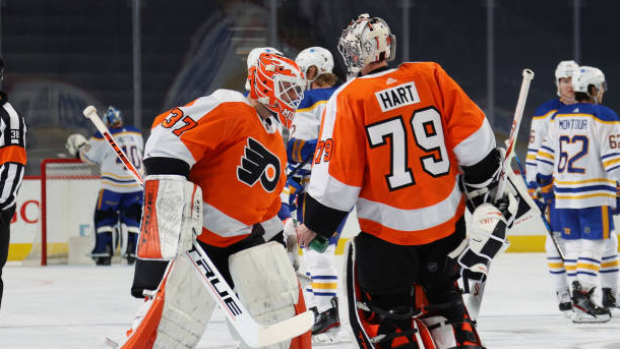 The Philadelphia Flyers have given Carter Hart two games off this week in hopes the 22-year-old can find his game, but TSN Hockey Insider Pierre LeBrun reports the team is also weighing their options of adding another goaltender before the trade deadline.

Hart has an 8-9-3 record this season with a .869 save percentage and a 4.04 goals-against average. He has not posted a save percentage above .890 since shutting out the Buffalo Sabres on Feb 28.

"Yeah, it has been a real struggle for Carter Hart. It is my understanding that the Flyers’ front office is having that discussion internally," LeBrun said on Insider Trading. "Do they go out and get goaltending help before the April 12 trade deadline and allow Carter Hart to have a bit of a reset and work on his game?

"Brian Elliott’s been a pro, but he might need help. On the flip side, what does that do to Carter Hart if you do that? So, there are pros and cons to this and that is what I believe they are discussing. The other thing is that the Flyers have to stay in the race. The next seven games before the deadline will be really important in terms of the Flyers wanting to add, no matter where it is, if they’re not playing better.

"One name to retain if they do decide to add a goalie: Jonathan Bernier, I believe, [is] on the radar of the Flyers. He is a pending unrestricted free agent for Detroit."

The Flyers, who are 4-5-1 in their last 10 games, sit fifth in the East Division, three points back of the Boston Bruins with two more games played.

Bernier, 32, has an 8-6 record with a .918 save percentage and a 2.78 goals-against average in 17 games with the Detroit Red Wings this season. Currently sidelined with a lower-body injury, Bernier is a pending unrestricted free agent, carrying a cap hit of $3 million.

Marleau on the Move?

Now second on the NHL's all-time games played list, Patrick Marleau said last week he wouldn't close the door on a move to a contender as he chases Gordie Howe's record of 1,767 games.

Kevin Kurz of The Athletic listed five teams who could be interested in Marleau, who is signed for the league minimum of $700,000, ahead of the trade deadline.

Marleau was traded by the Sharks to Pittsburgh for a conditional third-round pick last year, and Kurz lists the Penguins, Carolina Hurricanes, New York Islanders, Edmonton Oilers and Vegas Golden Knights as teams who could have interest this year.

The 41-year-old has two goals and six points in 34 games this season, but an NHL scout told Kurz a team could still look to acquire Marleau for depth ahead of their playoff run.

With 1,757 career games played, Marleau is just 10 games back of Howe's record and on track to break it in April.

Tanner Pearson is currently list at No. 9 on the TSN Trade Bait Board, there's a chance the Vancouver Canuck could come off the list ahead of the deadline.

"It sounds like there’s progress being made on unrestricted free agent Tanner Pearson," TSN Hockey Insider Darren Dreger said on Insider Trading. "I know that the Canucks spoke with Pearson’s agent, Joe Resnick. It’s not done yet, but the belief is that they are making progress. A lot of work to get done, but both sides are optimistic."

Pearson is in the final season of a four-year, $15 million deal signed with the Los Angeles Kings in 2017. He carries a cap hit of $3.75 million.

A first-round pick of the Kings in 2012, Pearson was traded twice during the 2018-19 season, first from L.A. to the Penguins and then to the Canucks for Erik Gudbranson. Currently sidelined with a lower-body injury, he has five goals and 11 points in 33 games this season. He scored 21 goals and posted 45 points in 69 games last season.

The Canucks have $25.7 million in projected cap space for next season, according to CapFriendly, with Thatcher Demko, Elias Pettersson and Quinn Hughes also slated for restricted free agency this summer. TSN Senior Hockey Reporter Frank Seravalli added Thursday that the team has had talks with Demko.

"Yeah, and they got to work on their six-day break, starting with Thatcher Demko, engaging in what I would call “substantive” discussions on what an extension might look like," Seravalli said. "I don’t think they’re close but the timing of how Jim Benning puts the pieces together in this puzzle with both Elias Pettersson and Quinn Hughes, also as pending RFA’s, will be interesting to see.

"It might help to get Demko done first, knowing what you have left to spend on those two guys."