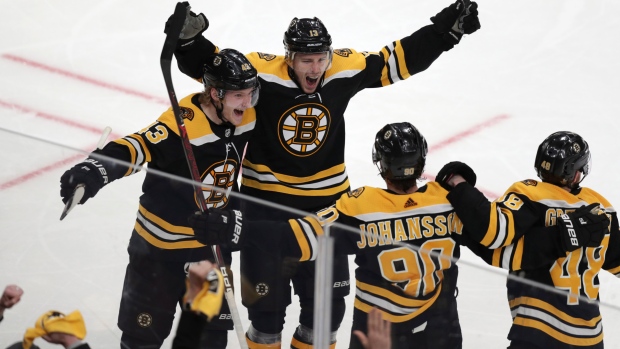 Charlie Coyle and his teammates celebrate his game winning goal , The Canadian Press

BOSTON — Charlie Coyle wasn't thinking about his first goal, which tied things up at the end of regulation.

Or his second, which won it in overtime.

What was weighing on him was the time he coughed up the puck and handed Columbus a goal, even though he redeemed himself by leading Boston to a 3-2 victory in Game 1 of the Eastern Conference semifinals on Thursday night.

Asked about his two late goals, Coyle said: "I had a costly turnover in the third period. You can't have that during the game.

"I'm just relieved we got the win," he added somberly. "I didn't really care who scored."

Coyle tied the game in the final five minutes of regulation and scored again with 5:15 gone in overtime to help the Bruins take the opener of the best-of-seven series and send Columbus to its first loss of the playoffs.

Tuukka Rask stopped 20 shots for Boston, which took a 1-0 lead on Noel Acciari's short-handed goal in the first period, then fell behind in the third after Brandon Dubinsky and Pierre-Luc Dubois scored in a span of 13 seconds.

"I think we know how to respond to that. We didn't get rattled," Rask said. "We felt like we were going to get it back, and we did."

A native of nearby East Weymouth who was acquired at the trading deadline from the Minnesota Wild, Coyle said that when he would play street hockey on the cul-de-sac where he lived he used to imagined himself coming through for his hometown team.

"You always think about that stuff," he said. "I'm sure we've all done that. It's pretty cool to be living it."

Sergei Bobrovsky made 34 saves for the Blue Jackets, who swept the Presidents Trophy-winning Tampa Bay Lightning in the first round.

Game 2 is Saturday night in Boston before the best-of-seven series moves to Columbus for Games 3 and 4.

The Blue Jackets were the last team to qualify for the NHL playoffs, then they knocked out the Lightning in four games for their first-ever playoff series victory. While Columbus waited more than a week for an opponent, Boston tangled with Toronto for seven games before finally advancing on Tuesday night.

"You can't simulate a playoff game, especially a second-round playoff game against a really good team like that," Dubinsky said. "I figured we'd come out with a little rust. Obviously, we need to be sharper."

And the Bruins didn't seem tired, outshooting Columbus 12-1 early in the game and scoring short-handed midway through the first after Coyle was sent off for hooking. Acciari brought the puck into the zone with Joakim Nordstrom waiting for the centring pass, but Acciari snapped off a wrist shot that beat Bobrovsky on the stick side.

"That was the biggest plus in the first period: We're coming out of it 1-0," Columbus coach John Tortorella said. "You saw our struggles in the first. We just couldn't handle the tempo of the game or their speed."

It remained 1-0 until Nash forced Coyle's turnover at the blue line and then deflected a shot from Seth Jones into Dubinsky and past Rask to tie the score with 12:21 left in regulation. The Blue Jackets were right back at it after the faceoff, bringing the puck the length of the ice from behind their own net before Artemi Panarin's slap shot deflected off the back of Dubois' leg and into the net.

Bruins forward David Krejci did not finish the game after taking a hit from Riley Nash late in the third period. Cassidy said he was not in the concussion protocol.

"He got hit. He left the game. By the time he was available to come back, the game was over," Bruins coach Bruce Cassidy said, calling him day to day.

NOTES: Rask is the 12th goalie in NHL history to record 40 or more postseason victories with an Original Six franchise. ... Coyle is the second Bruin to score a game-tying goal in the last five minutes of regulation and then add the game-winner. Patrice Bergeron did it in Game 7 of the 2013 first round against Toronto.