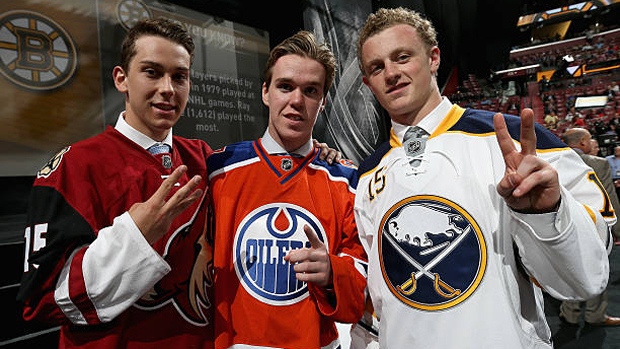 Dylan Strome has appeared in just 28 NHL games since the Arizona Coyotes picked him third overall in the 2015 NHL Entry Draft and is hoping he can find justify the Coyotes faith in him long-term.

"I'm still trying to prove that I belong and that Arizona made the right pick," Strome told NHL.com. "Hopefully in five, 10 years down the road people will look back and say they did make the right pick. Time will tell."

The 21-year-old posted more than a point per game (22 goals, 53 points in 50 games) as a rookie in the AHL last season, and finished with four goals and nine points in 21 NHL games. Strome said his goal for this season is to play the full year with the Coyotes.

"My goal is to play 82 games in the NHL this year," said Strome. "I do feel like I belong there."

Coyotes head coach Rick Tocchet said earlier this month that Strome could move from centre to the wing as he looks to find his spot on the NHL roster, though Strome's preference is stick at his natural position.

"I feel like I showed last year, the last 10 games, that I could play it," Strome said of his season-ending NHL stint, in which he had three goals and eight points.

"Look, if he was a second-round pick and he comes in and lights up the American League, I think everyone would be saying this guy is an untouchable," Chayka added to NHL.com. "He's a [6-foot-3] centre with a great year of pro [hockey] under his belt and he's produced at every level. I view him as a really good player."

The Arizona Republic projects Strome to open the season at right wing for the Coyotes on the team's third line with centre Christian Dvorak and free agent addition Michael Grabner.