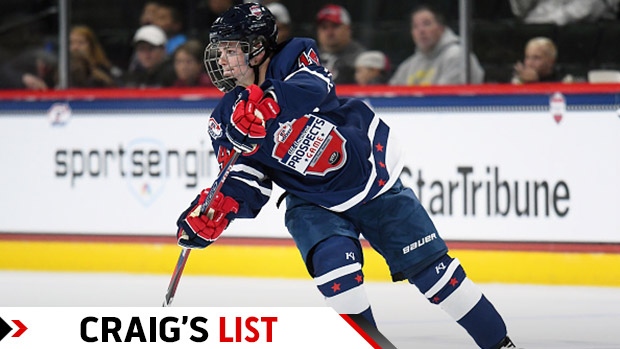 Jack Hughes and Kaapo Kakko remain in a class of their own as the top two prospects in their draft class, but Cole Caufield’s prodigious scoring exploits have propelled him into the top five in the final edition of Craig’s List heading into the  2019 NHL Draft.

The diminutive sniper took a big leap up TSN Director of Scouting Craig Button’s ranking, finishing the year behind only American centre Hughes (No. 1), Finnish right winger Kakko (No.2) and Vancouver Giants defenceman Bowen Byram (No. 3). Caufield ranked No. 10 in Button’s March list.

The 5-foot-7, 163-pound right winger was a goal-scoring machine this season for the USA Hockey National Team Development Program, finding the back of the net 72 times in 64 games while often skating on a line with Hughes. The highlight was his MVP performance at the World Under-18 Championship in Sweden, where he tied Alex Ovechkin’s tournament record by scoring 14 goals in seven games.

“Caufield is an elite scorer,” Button said. “The elite scorer needs an elite playmaker [Hughes] but it cuts both ways because the playmaker can’t be prolific in his game without the finisher. Caufield has an excellent scoring IQ and arrives at the right places at the right times. He’s the best pure goal scorer available in this draft.”

While Caulfield often gets compared to 41-goal scorer Alex DeBrincat of the Blackhawks – a 5-foot-7, 165-pound left wing who had 65 goals for the OHL’s Erie Otters in his draft year but still lasted until the 39th pick in 2106 ­– Button believes his skill deserves far more focus than his height.

“The obvious comparison is DeBrincat because of the size, but when I watch Caufield play it’s his ability to score in multiple ways that captures my attention,” Button said. “He handles the puck with ease, beats obstacles, breaks down goalies and has a lethal release that makes him very difficult to stop. That’s the description of an elite goal scorer. I think Caufield should be compared to those types of players, not just the ones who may be of a similar height.”

Caufield is followed in the top 10 by his USNDTP teammates Matthew Boldy (No. 5), a left winger, and Trevor Zegras (No. 6), a centre. Swedish defenceman Philip Broberg (No. 7) is the only other blueliner to crack Button’s top 10.

Another big riser in the final rankings is Winnipeg Ice centre Peyton Krebs, who jumped all the way up to No. 8 after being at No. 17 in March. Krebs had 19 goals and 68 points in 64 games for an Ice team that missed the Western Hockey League playoffs and relocated from Kootenay to Winnipeg at season’s end.

“Krebs reminds me a lot of Ryan O’Reilly,” Button said. “Coaches have a sense of calm when he’s on the ice because they know he has all aspects of the game under control.”

The top 10 is rounded out by Russian right wing Vasili Podkolzin (No. 9), who was ranked as high as third by Button earlier this season, and USNDTP forward Alex Turcotte.

Outside of the top 10, Button has USNDTP goaltender Spencer Knight (No. 15) in position to become the first goaltender selected in the top 15 since the Dallas Stars took Jack Campbell with the 11th overall pick in 2010.

“I don’t see Knight going this high as a gamble at all,” Button said. “He’s calm, poised and has every athletic attribute necessary to excel. Combine that with his excellent hockey sense and you have a future No. 1 goalie.”