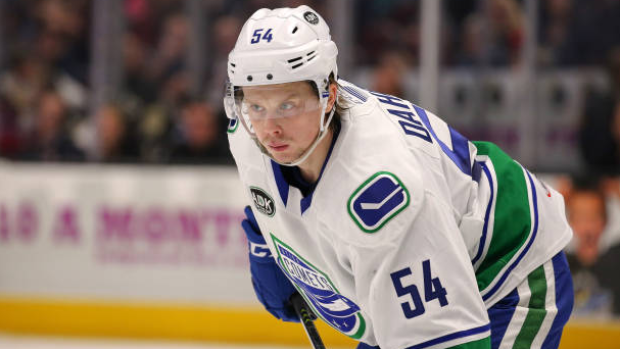 Canucks general manager Jim Benning said last week that Dahlen was dealt after his agent requested a trade. Dahlen, however, told Sweden's hockeynews.se he did not request a move and that Benning's comments led to Vancouver fans going after him on social media.

“I find it difficult to get messages from Vancouver fans," said Dahlen, per Google Translate. "They have written very hateful messages and it ended with me removing both Twitter and Instagram. I have tried to keep myself in the dark now and focused on trying to feel a bit better.”

Dahlen, 21, said he told his agent he felt like he wasn't being properly developed by the Canucks organization. “They have had the wrong approach and that is what I have told the agent,” he explained. “That it is the wrong way to treat me if they want me to develop.”

Dahlen posted 14 goals and 29 points in 50 games with the AHL’s Utica Comets with a minus-13 rating.

“It feels like I have been trampled rather than lifted," he added. "Instead of becoming a better hockey player, it has gone in the opposite direction.”

Benning suggested after the trade deadline that Dahlen was unhappy to be playing at the AHL level.

Dahlen has three assists in three games since joining the AHL's San Jose Barracuda with a minus-2 rating.

In exchange for Dahlen, the Canucks acquired forward Linus Karlsson, who has four goals and 17 points in 50 games with Karlskrona HK in Sweden's First Division this season. Benning said last week the team was looking for a lateral move in trading Dahlen.

“His agent asked me a couple weeks ago if we could move him and if we could trade him,” Benning told reporters after the Feb. 25 trade deadline passed. “I said if we can do a lateral move where we feel good about getting a player back that we like, we’ll look to do that. Otherwise we weren’t going to do it.”