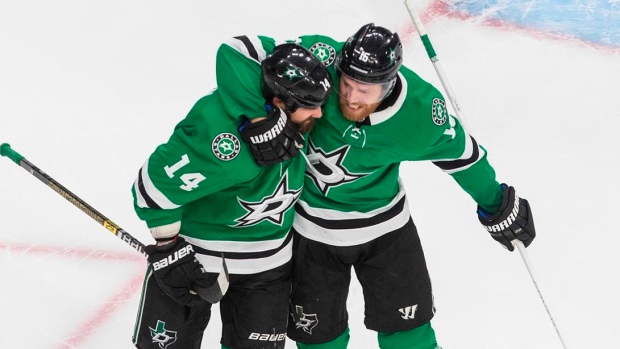 EDMONTON — Radek Faksa and the Dallas Stars are one win away from the Western Conference finals for the first time since 2008.

Faksa had goal and two assists and Roope Hintz scored the last of three power-play goals by the Stars in a 5-4 win over the Colorado Avalanche on Sunday night, taking a 3-1 series lead after another game of wild scoring swings.

“It just seems like when one team gets one goal it kind of gives them a boost," Stars captain Jamie Benn said. “I’m not sure why it’s going back and forth like this, but it is. And you’ve just got to handle the momentum as it comes.”

Right now, it's advantage Stars, who had a 3-0 lead in the first period before Colorado had its first shot on goal, and scored twice in a 32-second span in the period that included a gift goal.

“They came out hard and earned their bounces. All of a sudden we’re down 3-0," Avs centre Nathan MacKinnon said. “We got better, I felt, as the game wore on. ... We had a push earlier in the third to tie it up. Obviously getting down in a hole early didn’t help us.”

John Klingberg had a goal and an assist for the Stars, who can wrap up the series in Game 5 on Monday night. The back-to-back games were previously planned, though initially those consecutive games were supposed to be Games 5 and 6.

Colorado won 6-4 in Game 3 on Wednesday night after a wild third period when the Stars scored three goals in a row to lead before the Avs then reeled off three in a row. That was after Game 2 when Dallas fell behind 2-0 in what turned into a 5-2 victory.

Both teams had two runs of multiple goals Sunday, though the Stars never trailed.

“We’re keeping our composure,” Benn said about going into a potential series clincher. “We know how hard that Game 6 was against Calgary."

The Stars eliminated Calgary 7-3, scoring seven consecutive goals after falling behind 3-0 before their first shot on goal.

Colorado was down 3-0 without a shot against the Stars this time, but got within 3-2 on rookie defensman Cale Makar’s goal with 25 seconds left in the second period. That was only 11 seconds in to a 5-on-3 after two Dallas penalties on the same play. Makar scored on a one-timer from just inside the left circle on a pass from MacKinnon.

But the Avalanche couldn’t take advantage of rest of the power play, including the first 1:24 of the final period.

Two quick Dallas goals were the difference. Hintz scored at the end of a power play, on his team's seventh shot during that segment. The gift came 32 seconds later when Makar tried to clear a puck from behind his own net and flubbed the attempt. Goalie Pavel Francouz didn't see it go in front of him, and rookie Denis Gurianov knocked it in for a 5-2 lead.

“Plays like that happen in the course of a game, in the course of a career,” Avs captain Gabriel Landeskog said. "He’s not going to stop playing the way he is either. He’s strong mentally. He’s in this position for a reason and he’s making the Stanley Cup playoffs look easy for a reason. He’ll bounce back no problem.”

Valeri Nichushkin, the former Dallas player who had no points in the first 11 games this post-season for the Avalanche, scored two goals. Vladislav Namestnikov added a goal with 3.6 seconds remaining when Colorado had an extra skater on the ice.

Anton Khudobin, who had never made a post-season start before this year, stopped 33 shots for the Stars.

Dallas went ahead to stay on Klingberg's goal just over six minutes into the game, knocking in the puck after Francouz couldn't control Faksa's shot. It was 2-0 less than three minutes later after Faksa poked in a score on a power play, and Benn added another goal with a man advantage midway through the first period.

NOTES: MacKinnon's franchise record is now a 12-game points streak to start the post-season. The last NHL player to open the playoffs with a 12-game point streak was Johan Franzen for Detroit in 2010. ... Miro Heiskanen had an assist, and his 16 points are a franchise record for a Dallas defenceman in the playoffs. “He’s just going to keep getting better,” coach Rick Bowness said of the 20-year-old defender. ... Francouz, in net since Philipp Grubauer was injured in Game 1 of this series, was pulled after the fifth Dallas goal. He had 21 saves. Michael Hutchinson made his playoff debut and stopped three shots. ... Dallas had 10 shots on goal before Nazem Kadri had the first for Colorado with 1:34 left in the first period. Kadri had already had two penalties, leading to the first two power play goals for Dallas.