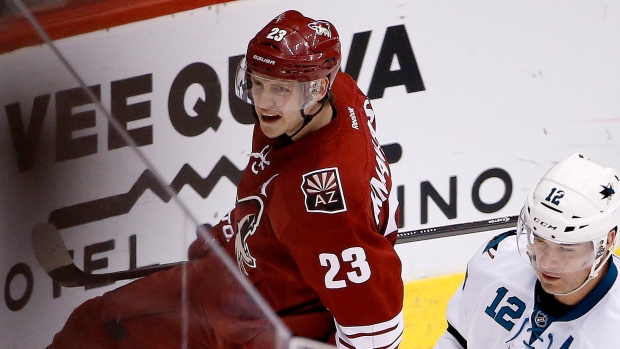 Back in the summer of 2007, while I was covering the Stanley Cup Final between Ottawa and Anaheim, the biggest hockey conversation was about a team that hadn't even made the playoffs that season - the Phoenix Coyotes, whose future was being debated on an hour-by-hour basis.

Back then the story involved a rogue owner, a sympathetic city council and bankruptcy court.

And eight years later, the Pheonix Coyotes now go by the Arizona Coyotes and the players involved have changed. But the bottom line has not.

This team still loses money, because there still doesn't appear to be enough people in the region willing to drive up to Glendale and pay for hockey tickets.

But here's what has changed. Finally, after years of bad deals upon bad deals for the city of Glendale, the council and its mayor have had enough.

The legalities of breaking a 15-year lease are for a court to decide, but the notion that Glendale doesn't believe it should be providing what amounts to a subsidy to the hockey operations of the Coyotes is simple common sense.

The roots of this problem go back to when Glendale was first sold on the idea of building an arena and stimulating its economy with professional sports. It was a flawed concept from the outset and one that's done nothing but put the city into an economic crisis while underwriting the salaries of millionaire hockey players with public dollars.

As private business, a professional sports team is entitled to pay its players as it sees fit. But when its economics are being propped up with the dollars of ordinary citizens handed over by politicians, it's nothing short of obscene.

If a pro sports franchise in any market can't survive on its own on a cash-in, cash-out basis, then it shouldn't exist. End of story.

And anyone who tells you these kinds of arrangements are actually investments that reap economic benefits for the municipalities that hand them out, well, tell them to consult an economist. And preferably not one hired by a team or a league to draw foregone conclusions.

The Coyotes have stayed in Glendale longer they should have because the NHL didn't want to be perceived as giving up on a city that has extended itself to such extremes for professional hockey.

But now that city wants the NHL to go away. And it's time the Coyotes, like any good house guest, acquiesce.