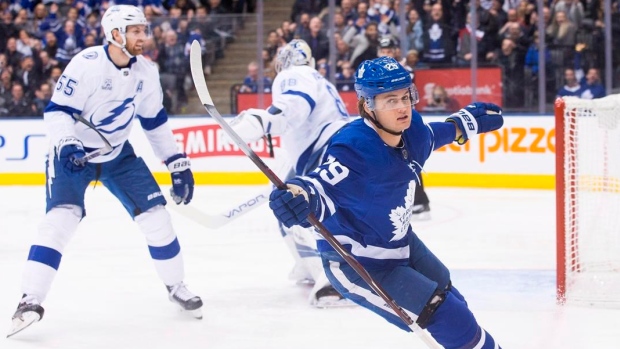 William Nylander skated in Europe once again Monday, taking the ice with a backup goaltender of Austria's Dornbirn Bulldogs.

MacQueen told First Up on TSN 1050 Toronto that he first believed it was a joke when his general manager informed him Nylander wanted to skate with the team. Nylander was in Austria with his father, Michael, to visit his sister, a tennis player who trains at a facility next door to the Bulldogs.

MacQueen said he believes Nylander is in good shape and was unsure whether Nylander would practise with his team again on Tuesday.

"Honestly, when he jumped into drills, he looked like he was having fun," MacQueen said. "He was joking around with the guys. I know he took a few of the guys – and he doesn't even know these guys – out for lunch one day. And for him to be out there today, he was on the ice today probably, I'm guessing, (for) over two hours by himself with a goaltender, just running through drills. I know it's not the same as being in at an NHL camp or in games there, but he looks motivated, honestly. He goes to the gym every day, since he's been here anyways. Looks like he's in good shape, he's got a smile on his face.

"I did get the indication today when I said, 'Hey, I hope I don't see you, good luck and I hope everything works out the way you want it to work out.' and he goes, 'Yeah, hopefully sooner rather than later.'"

The Maple Leafs (6-3) have lost their past two games and will take on the Winnipeg Jets on Wednesday.