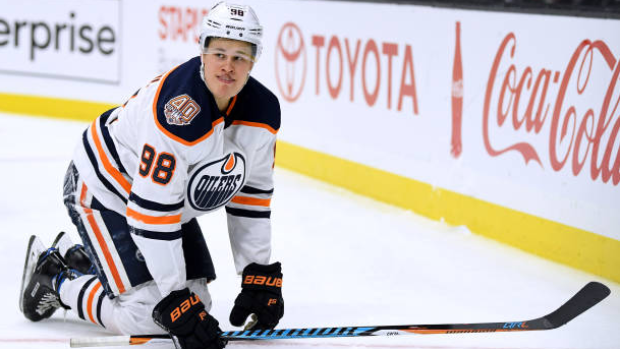 It appears Jesse Puljujarvi is not planning to return to the NHL this season.

The 21-year-old winger, who has an NHL opt-out clause in his contract with Oulun Karpat until Dec. 1, told Sami Hoffren of Finland's Iltasanomat that he intends to remain in the Liiga.

"The 100 per cent focus is on playing in Oulu until the end of the season and being able to play a great season there," Puljujarvi said, via a translation.

#Oilers RFA Jesse Puljujarvi tells @shoffren that the plan is to remain in Finland for the entire season: "The one hundred percent focus is on playing in Oulu until the end of the season and being able to play a great season there."https://t.co/7irNUImEs9

Puljujarvi remains a restricted free agent for the Edmonton Oilers and stated his desire for a fresh start away from the team during the summer before signing in Finland. He has 11 goals and 20 points in 18 Liiga games this season.

The 2016 fourth-overall pick has struggled to carve out a permanent role on the NHL roster with the Oilers since making the leap to the NHL three years ago. His most recent season ended with surgery on both hips in early March. He had four goals and nine points in 46 games before going under the knife.

TSN Hockey Insider Darren Dreger reported last month that interest was growing in Puljujarvi from teams around the league, but there was "nothing doable from Edmonton’s perspective" yet. Oilers general manager Ken Holland said in September he would not a force a trade and added he is prepared to hold onto the 21-year-old's rights this season.

“I believe there are teams out there that are interested,” Holland said, per the Edmonton Journal. “Obviously, I didn’t get anything that I felt that was worth pushing to the final stages and getting a deal done.

“You get into late August and everything kind of goes quiet and now you have prospects tournaments all over the league, so it’s gone quiet. We’ll see, I’m not going to force something. If it’s there, I’ll explore it. If it’s not there, I’m prepared to sit.”