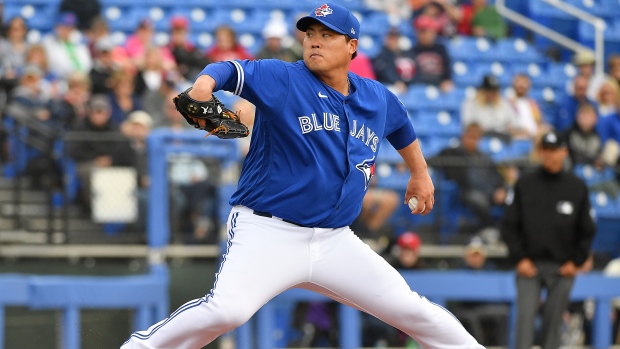 TORONTO — The projections alone are a reason for optimism.

Back in March, the Toronto Blue Jays were given a 0.9 per cent chance by FanGraphs to make the postseason in the usual 162-game grind that’s designed to separate the contenders from the pretenders.

Now, with a 60-game sprint sure to provide a whole lot of small sample size noise that we’re not accustomed to, that number has jumped all the way to 15.1 per cent.

There are many teams with better odds, but there’s no getting around the fact that the Jays are a hot start away from turning a lot of heads, a common line of thinking in every MLB city as of today.

Of course, a slow start would quickly bury them and we could be talking about another top 10 draft pick by the middle of August.

With Jays players and staff finally getting set to charter to Toronto on Sunday and then take the field Monday for their first workout at Rogers Centre, even GM Ross Atkins will admit the expectations have changed.

"Our objective chances have improved," Atkins said on a conference call with beat writers Saturday afternoon. "If you spoke to our coaches and players, they’ve always been thinking about winning and about this being a very competitive group. The fact that it is a shorter season, we’re talking about how to maximize that.

"Teams are going to be thinking about the urgency of each win and the significance of each win in a shortened season."

When you’re scouring the league for teams that could potentially surprise, two elements are needed to navigate this odd shortened season and make a run: Pitching depth and high-end young talent that could catch fire.

The Jays are chock full of the latter, and you could conceivably envision the group of Vladimir Guerrero Jr., Bo Bichette, Cavan Biggio or Lourdes Gurriel Jr. carrying a team offensively for a week or two.

Normally, the ups and downs of youth would even out over the course of 162 games, but a player carrying a team for a week now is akin to doing it for almost a month.

How the pitching performs will likely tell the story in the end.

Hyun-Jin Ryu will finally make his Blue Jays debut on opening day, and Nate Pearson is waiting in the wings — likely for at least a week to gain an extra year of team control in 2026 — to provide another potential top-of-the-rotation starter if the adjustment to facing big-league hitters for the first time goes smoothly.

It doesn’t stack up to a lot of the rotations they’ll face in the AL and NL East, but it’s leaps and bounds better than last year, with some upside mixed in.

The Jays front office and pitching coach Pete Walker are working through their plans for pitcher usage, but expect to see a ton of arms being used in creative ways — openers, maybe a six-man rotation, matchup strategies — especially early on with a 30-man roster for the first two weeks and starters only able to extend out to three or four innings.

Depending on the resources they’ve had access to during the shutdown, pitchers are coming into camp at different points of readiness.

"On the low side, they’ve been up to one inning of live BP, and on the high side have been up to four innings of simulated game work," Atkins said. "That’s a decent starting point.

"What we’ll focus on is competitiveness and less on bulk as they start the season. If one of our starting pitchers is only able to make it three or four innings in his first start, then we’ll be ready to offset that. We’d rather be sure that the effectiveness and the health is at the forefront."

When Pearson arrives, it won’t be as a reliever.

He’s been developed as a starter and, obviously, as one of the top pitching prospects in baseball, looks like he could be a good one.

The 100-mph heat and wipeout 90-mph slider will play right away, but it’s good business to leverage the way the service time rule is written and make Pearson an (inexpensive) Blue Jay for as long as possible.

But without a doubt, he’s a reason not to put a ceiling on this team, both in 2020 and beyond.

"As he was in spring training, we talked about what is going to be best for his development and what is going to be the absolute best thing for him to do not just in the first five days of spring training, but as we learn more and more," Atkins said. "As we get everyone into camp and see everyone’s status and see where they are, then we’ll make those decisions as we get closer to Opening Day."

Workouts at Rogers Centre next week will look different than anything we’ve ever seen, as players will don masks, the roof will be open, weather permitting, and it will be a spring training-type atmosphere in a non-spring setting.

"We’ll have waves of workouts that occur," Atkins explained. "We have to factor in that we can’t have staff there all day, every day, so we’ll have to have waves of staff that come and go to the ballpark every day. For safety and health reasons, we’ll have those waves occurring, but I think it will also create more opportunities for creativity and innovation."

Once the Jays get on the field Monday — the final schedule is expected to be announced by MLB that day — they’ll have 18 days to get ready for their July 24 opener.