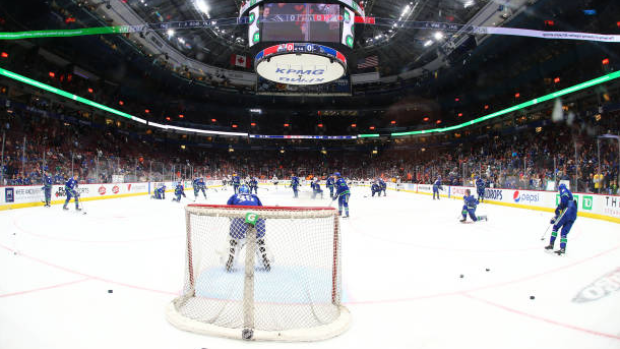 OTTAWA — The federal government has made a move to try to help one of three Canadian markets become a hub city for the National Hockey League's resumption of play.

A federal official told The Canadian Press on Thursday that the government issued an order in council that would allow one of Vancouver, Edmonton or Toronto to serve as one of the NHL's two hub cities during the COVID-19 pandemic.

The official was granted anonymity because they weren't authorized to discuss the order publicly.

The order is awaiting the Governor General's signature.

Paves the way potentially for one of the 3 Canadian cities to be a NHL hub. As I reported Thursday, sources with both the NHLPA and NHL dispute the perception that Toronto is a front-runner. It was made clear to me that Edmonton and Vancouver have just as much a shot at it still https://t.co/FRnyVJx45O

Minister of Immigration, Refugees and Citizenship Marco Mendicino has issued a letter saying it's in the national interest to have a Canadian hub after the Public Health Agency of Canada and the public health authorities in Toronto, Edmonton and Vancouver all gave their approval of the NHL's plan to keep players separate from the general public.

It would be called a cohort quarantine.

The move would allow the NHL to bypass the traditional 14-day quarantine for anyone entering Canada.

The NHL had to present a plan that met public health requirements for Canada before the government proceeded with the order.

The NHL plans to start training camps for the 24 remaining teams on July 10 and hopes to resume play later in the summer.