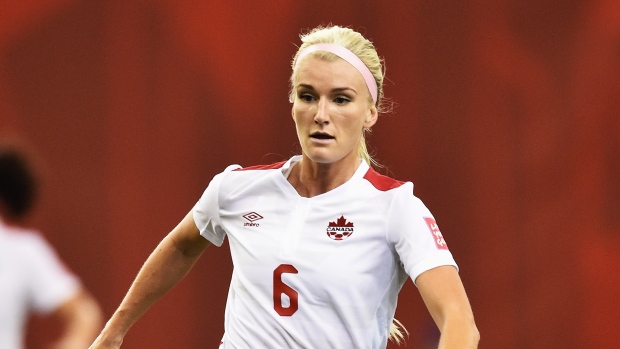 GRENOBLE, France — Former Canadian international Kaylyn Kyle says she has received death threats for her TV criticism of the U.S. team for excessive goal celebrations in a 13-0 rout of 34th-ranked Thailand at the Women's World Cup in France.

It was the largest margin of victory in tournament history. And the top-ranked Americans did not hold back on the celebrations as they began defence of their World Cup crown.

After making it 9-0 in the 79th minute Tuesday night in Reims, captain Megan Rapinoe held her arms out like airplane wings, twirled and then slid on the ground, kicking her leg into the air repeatedly before continuing the celebration with the American bench.

"Obviously we have the utmost respect for everyone we play, but it's the World Cup," Rapinoe said later.

The lopsided result prompted debate over both running up the score — goal difference can be crucial in the group stage of a tournament — and the American celebrations as the score mounted.

Kyle, an analyst in TSN for the tournament, was one of those not impressed by the unbridled American jubilation after goals.

"As a Canadian we would just never ever think of doing something like that ... For me it's disrespectful, it's disgraceful," Kyle, who retired in 2017 after winning 101 caps, said on air. "Hats off to Thailand for holding their head high."

Kyle subsequently said on social media that her comments had prompted death threats.

"To the people sending me death threats, let me set the record STRAIGHT!," she wrote on her verified Twitter account. "I never once said to never score as many goals as you can in a World Cup!!! PLEASE WATCH FULL SEGMENT! I said the exact opposite. IT'S THE WORLD CUP. You score as many as you can and don't take the foot off the gas pedal!

"I did say I thought it was excessive and disrespectful the goal celebrations of the American team once the score hit 8-0. Everyone is allowed their opinions towards my thoughts 100% but please leave the death threats!"

Fellow TSN analyst Clare Rustad, a former international with 45 Canada caps, and veteran Canadian midfielder Diana Matheson, who is missing the tournament through injury, also criticized the American behaviour while noting the importance of goal differential.

"This was disgraceful from the United States," said Rustad. "I would have hoped they could have won with humility and grace but celebrating goals 8, 9, and 10 the way they were doing is really unnecessary."

Seven different players scored for the Americans, tying Germany for the most in a World Cup match. Alex Morgan's five goals tied her with fellow American Michelle Akers for most goals in a single World Cup match.

Asked about the lopsided score, U.S. coach Jill Ellis wondered if a 10-0 victory in a men's World Cup would prompt the same questions.

"This is a world championship, so every team here has been fantastic to get to this point. And I think that to be respectful to opponents is to play hard against opponents, and as Alex said, it's a tournament where goal differential is important," Ellis said.

Added Morgan. "Every goal matters in this tournament and that's what we were working on."

"For all that have issue with many goals: for some players this is there first World Cup goal, and they should be excited. Imagine it being you out there. This is your dream of playing and then scoring in a World Cup. Celebrate. Would you tell a men’s team to not score or celebrate?" she tweeted.

USA Today columnist Nancy Armour also had no time for the critics.

"You want the Americans to impose the slaughter rule or patronize their opponents by pretending they didn't just tack another goal onto the scoreline? Go join the 6-year-olds in the park," she wrote. "Maybe you'll get a participation trophy and an orange slice while you're at it.

"This is high-level competition, and the Americans have no reason to apologize for treating it as such."

Retired American international Taylor Twellman, now an ESPN analyst, tweeted he had zero problems with the scoreline given "this is THE tournament BUT celebrating goals (like #9) leaves a sour taste in my mouth like many of you."

"After beating Thailand 13-0 & celebrating each goal #USWNT may have lost fans, domestically & internationally...and sealed themselves as villains of the @FIFAWWC. I love it. But the soccer gods can be cruel and vindictive. If US goes on to fail, their behavior will be on a loop," said Alexi Lalas, another former U.S. international turned TV pundit.

The Americans play No. 39 Chile in Paris on Sunday.

Morgan became the first player with five goals and three assists in the same match.

The Americans set another tournament record with four goals in six minutes in the second half. And the multi-goal performances by Morgan, Rose Lavelle and Samantha Mewis marked the first time a team has had three different players score multiple goals in one match at the tournament.

Thailand made its World Cup debut four years ago in Canada, exiting after 4-0 preliminary-round losses to Norway and Germany and a 3-2 victory over the Ivory Coast.

The Thai women qualified for the 2019 tournament by reaching the semifinals of the 2018 AFC Women's Asian Cup where they lost in a penalty shootout to No. 6 Australia before losing the third-place match 3-1 to No. 16 China.

The top five finishers at the Asian qualifier advanced to the 24-team World Cup.