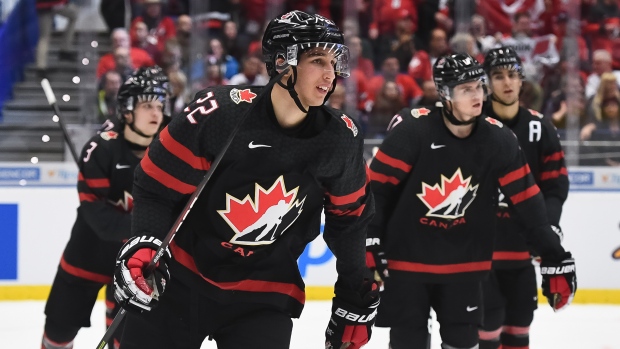 With most junior and amateur leagues on hold until the new year, Hockey Canada will be hosting its most extensive World Junior selection camp ever beginning in November, with 47 players invited on Thursday to compete for a spot on Canada’s 2021 roster.

Forward Alexis Lafreniere, who played in the last two World Juniors and was drafted first overall by the New York Rangers earlier this month, is not on the roster as he prepares for the start of the NHL season. He tallied four goals and 10 points in five games at last year’s tournament, earning MVP honours.

"Although this has been a difficult year for our athletes and staff, we are excited to unveil the 46 players who will compete for a spot on Canada’s National Junior Team at the 2021 IIHF World Junior Championship," said Senior Vice-President of National Teams Scott Salmond, who led the selection process. "We know our athletes are excited for the opportunity to defend gold on home ice this year, and we expect a highly competitive selection camp with a number of difficult decisions to be made when it comes time to select the players who will wear the Maple Leaf in Edmonton in December."

Kingston Frontenacs forward and 2022 NHL draft prospect Shane Wright is also on the roster. Wright, 16, had 39 goals and 66 points in 58 OHL games last season after being granted exceptional status to play in the league.

Hockey Canada’s selection camp - run by head coach Andre Tourigny - goes from Nov. 16 through Dec. 13 in a cohort bubble in Red Deer, AB, with practices, three intrasquad games and six games against a team of U SPORTS all-stars.

Every game of the World Junior tournament can be seen live on TSN, the TSN App and TSN Direct and can also be heard on TSN Radio.