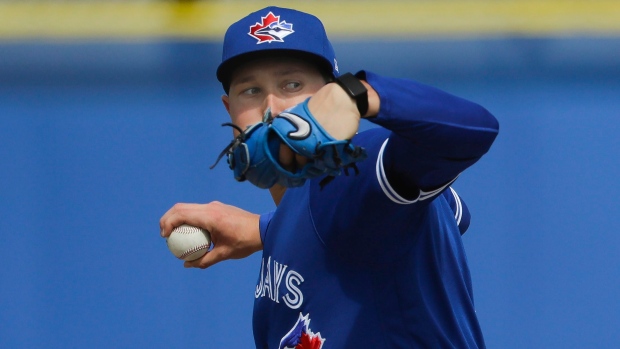 A hard-throwing pitching prospect could be joining them in the big leagues soon.

Right-hander Nate Pearson had a dominant spring debut for the Blue Jays on Tuesday, striking out the side in a one-inning start. The 23-year-old was Toronto's first-round draft pick in 2017 and had a breakout season in 2019, striking out 119 batters over 101 2/3 innings and getting promoted from Single-A to Triple-A by the end of the year.

The 6-foot-6, 245-pound Pearson has the upside of a future ace and has a shot to earn a spot in the Blue Jays' opening day rotation alongside newly acquired Hyun-Jin Ryu, who signed an $80 million, four-year deal in the off-season. But even if Toronto decides he needs more experience in the minors, there's little doubt he's a big part of their future plans.

Other players who are off to a good start in the Grapefruit and Cactus Leagues:

It's been a rough start to the spring for the Yankees, who are already dealing with multiple injuries. Now that Luis Severino is out for the year and James Paxton will miss extended time, the starting rotation needs a few younger pitchers to emerge.

One intriguing possibility is the 25-year-old Jonathan Loaisiga. The hard-throwing right-hander has spent parts of the past two seasons in the big leagues and finished with a 2-2 record, 4.55 ERA and 37 strikeouts in 31 2/3 innings in 2019. He pitched a scoreless inning in his spring debut Sunday.

The speedy Arozarena was acquired by the Rays in a trade with the St. Louis Cardinals during the off-season. The 24-year-old has had a great start to his spring, going 5 for 7 at the plate with a double, triple and four RBIs through Wednesday's games and could be a versatile piece for the Rays' offence.

The 23-year-old Bohm was the third overall pick in the 2018 draft and he's continuing to show why he's a big part of the Phillies' future, going 4 for 9 at the plate in his first four spring training games.

He was also impressive in the Arizona Fall League earlier in the off-season, batting .361 with two homers.

After a stellar 15 years in Seattle, Hernandez is trying to prove he's still a big league-calibre pitcher with the Braves during spring training. He's had an encouraging start, giving up just one run over 4 2/3 innings in two starts.

The six-time All-Star and 2010 Cy Young award winner is still just 33 years old. He could prove a valuable option for the Braves, especially if Cole Hamels has to miss extended time.

The 26-year-old Marte was one of the best players in baseball last year with a breakout season that included a .329 batting average, 32 homers, 36 doubles and 92 RBIs.

He was just as dominant in his early spring at-bats, going 3 for 5 with a double, homer and three RBIs. He'll be right in the middle of what's expected to be a deep Diamondbacks lineup after the team acquired outfielders Kole Calhoun and Starling Marte in the off-season.

Adell is still just 20 years old, so there's a decent shot he starts the season in Triple-A. But the top prospect has been impressive in the spring's early games, going 3 for 9 at the plate with a stolen base.

Much like Bohm, he was also good in the Arizona Fall League a few months ago, finishing with a .273 batting average, eight doubles and three homers in 24 games.