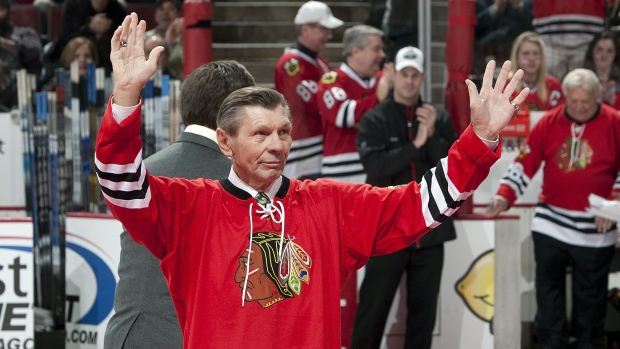 Mikita becomes the 11th known former NHL player, and the first member of the Hall of Fame, to have tested positive for CTE.

"Stan Mikita was diagnosed with [two] neurodegenerative diseases that our research has shown are associated with a long career in contact sports such as ice hockey: CTE and Lewy Body Disease," said Dr. McKee.

Mikita had visited the research team in Boston and then decided to pledge his brain to support research.

“We hope Stan Mikita's pledge and CTE diagnosis will inspire greater participation in research from the hockey community," said Chris Nowinski, Ph.D, co-founder and CEO of the Concussion Legacy Foundation, who helped facilitate Mikita's brain pledge. "Without greater participation from the hockey community, we have little hope for treating or preventing CTE within our lifetime."

In January 2015, Mikita's family said he was diagnosed with Lewy body dementia, a disorder with symptoms comparable to those of Parkinson’s and Alzheimer’s. He died at the age of 78 on Aug. 7, 2018.

As a child, Mikita moved to Canada from the small town of Sokolce, in what was then Czechoslovakia. He joined the Blackhawks in 1958 at the age of 18 and played his entire professional career in Chicago, where he is revered as a sports icon.

Mikita quickly developed into one of the NHL’s top scorers, but he also racked up at least 100 penalty minutes, or close to it, in five of his first six seasons. According to hockeyfights.com, Mikita had 13 fights in his first five seasons and 26 over his entire career.

Mikita played in 1,396 regular-season games, compiling 1,467 points and 926 assists – all franchise records ­– and 1,270 penalty minutes during his 21 seasons with the Blackhawks. His 541 goals rank second behind former teammate Bobby Hull’s 604.

He is widely credited as being the first player to begin using a stick with a curved blade. He was also one of the first NHLers to wear a helmet full-time.

While the NFL admitted in 2016 that a link exists between repeated brain trauma and long-term neurological disorders, the NHL has rejected the connection.

On May 1 in Ottawa, NHL commissioner Gary Bettman told a Canadian parliamentary committee studying concussions in sports that no such association has been established.

The NHLPA issued a statement to TSN a week later rejecting Bettman’s stance.

“It goes without saying that trauma to the brain can be harmful and we recognize, as the [U.S.] Centers for Disease Control and Prevention (CDC) has cited, that the research to date suggests that CTE is caused by repeated trauma to the brain, including concussions and sub-concussive events,” the players union wrote.

The NHL last summer settled a concussion-related lawsuit filed by more than 100 former players after a judge refused to approve the case to move forward as a class action. Several former players – including Dan Carcillo and Nick Boynton, as well as Montador’s family and Ewen’s widow, Kelli – are continuing to pursue individual lawsuits against the league.