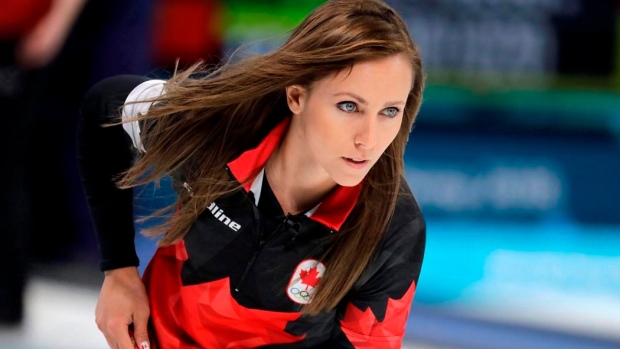 Simmering tension regarding provincial eligibility and residency rules appeared to boil over at the recent Ontario curling championship, leaving skip Rachel Homan seeking an apology and the provincial association launching a review into a harassment complaint.

A number of curlers in the competition, long upset that Homan's team was eligible despite two players primarily living out of province, voted for her to win the competition's sportsmanship award in an apparent mock gesture, sources told The Canadian Press on Tuesday.

The player vote was conducted last Thursday and Homan was presented with the award Friday at the Woolwich Memorial Centre in Elmira, Ont. She went on to win the competition Saturday and will represent Ontario at the upcoming national championship in Sydney, N.S.

On Tuesday, Homan issued a statement on Twitter that included the post: "Let's be better than yesterday. Stand up and speak out #antibullying."

She did not reveal specifics, only saying an incident occurred at the Ontario playdowns that was "disappointing" and "hurtful and disrespectful to all of those involved."

"On a positive note, many have come forward to apologize and take responsibility for their participation," Homan said in the statement. "It takes a lot of courage to do so. We appreciate that we all make mistakes and there is a lot of room for forgiveness. To those still attempting to hide and take no responsibility, it is a shame. We are simply seeking an apology.

"To personally tear someone down for reasons we may never know, is not a part of curling. There is no place for bullying in or out of sport."

Messages left with several curlers who played in the competition were not immediately returned. Team Homan declined to comment further.

At least three of the four players on a team must live in the same province, according to residency policy agreed to by Curling Canada and its member associations. Team Homan second Joanne Courtney is based in Edmonton and is the rink's so-called 'import' player.

Homan, meanwhile, goes to school in Edmonton, her husband lives in St. Paul, Alta., and she maintains a residence in her native Ottawa.

She can compete in the Ontario championship under an exemption for full-time post-secondary on-campus students, who can play either out of the province where they're attending school or where they have a residence.

Homan has not violated any residency rules, which have long been an issue in the domestic curling world and are expected to be updated again over the coming months.

However, some Ontario players have remained frustrated since learning of Homan's residence situation this season, sources said, wondering whether a student exemption should be used by a player who has regular travel commitments, is a full-time curler, and only resides in the province on a rare or part-time basis.

"I confirmed CurlON and Curling Canada had received the documents required under the current residency policy and that Team Homan was eligible," Chenier said in an email. "The player was satisfied and no other challenges were received."

Homan, a three-time national champion who represented Canada at last year's Pyeongchang Olympics, currently holds the No. 1 position in the world rankings.

In her statement, Homan also said her team would be making a donation to an anti-bullying campaign in Ottawa.

"I'm sure at one point we have all been in the wrong; whether we were the bully, the ones who jumped on board, or the bystander that didn't speak up," she said. "We need to learn from mistakes of the past and of others to be better. It's OK to speak up, to reach out. Bullies should never win."

Also Tuesday, CurlON confirmed a review was underway involving an "individual who was in the arena."

"All I can say is that we have received a harassment complaint against an individual — not a participant in the event," Chenier said. "We've initiated a review. We have a harassment policy and so we're in that due process right now. Until both parties have had an opportunity for their day in court, for lack of a better term, I really can't comment further than that."

The association has asked witnesses for a written report and will have involved parties speak to a CurlON review committee, Chenier said. Once a decision is made by Chenier and two board members, potential disciplinary action could be applied.

Curling spectators are traditionally very respectful, with heckling or verbal abuse quite rare when compared to other sports.

After Team Homan completed its traditional walk down the sheet after beating Julie Tippin in Saturday's final, a fan emphatically yelled "Ontarrrrrriooo" as the crowd cheered its approval, archive video footage showed.

A male spectator then bellowed "Alberrrrrtaaa" seconds later, creating an awkward silence before the trophy presentation. It wasn't immediately clear if that individual was the subject of the review.

The world women's curling championship will return to British Columbia next year.

Prince George will serve as host of the annual competition for the first time. The tournament is set for March 14-22, 2020 at the CN Centre, Curling Canada and the World Curling Federation said Tuesday.

B.C. last hosted in 2008, when Canada's Jennifer Jones won in Vernon. The 1998 world women's championship was played in Kamloops and the 1986 event was held in Kelowna.

This year's event is set for March 16-24 in Silkeborg, Denmark.