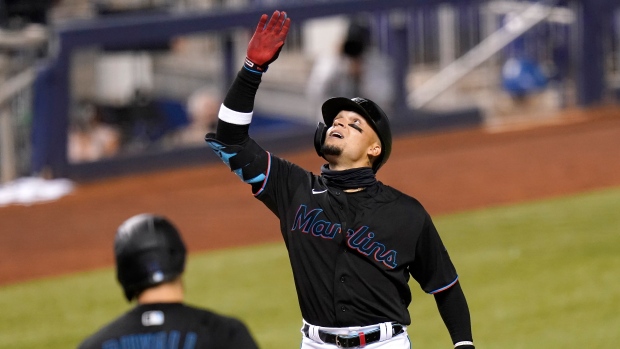 Miguel Rojas had two hits and scored three times for the Marlins, who have won four straight.

“Everyone is doing their job right now,” Diaz said. “We’ve just got to keep it consistent and keep it going.”

Milwaukee lost its sixth straight and fell to 0-5 on its seven-game road trip.

“You’re going to have rough stretches,” Brewers manager Craig Counsell said. “We’re in one of those stretches. And we’ll come out of it. Good baseball is how you come out of it and that will come.”

Trevor Rogers (4-2) gave up one run and four hits in five innings. The left-hander struck out six and walked two. He combined with three relievers to retire 14 consecutive batters until Adam Cimber, in his second inning of work, hit Avisail Garcia to start the ninth.

Milwaukee starter Brent Suter (2-2) left because of a cramp in his right calf after surrendering Garrett Cooper’s one-out single in the third. Patrick Weigel relieved Suter and walked Adam Duvall to load the bases before Diaz drove the first pitch over the wall in right-centre to give Miami a 5-0 lead. It was Miami’s first grand slam since Jorge Alfaro connected against the New York Mets Sept. 23, 2019.

“Just trying to take advantage of an opportunity there and keep an aggressive mentality,” Diaz said.

Diaz has reached safely in the seven games since being recalled from the alternate training site April 28.

“Obviously, that was a big hit in the game,” Miami manager Don Mattingly said of Diaz’s blast. “It changed the game completely around. He is seeing the ball good. Now he’s starting to get some results. Things are going good for him right now and he is playing well.”

Pablo Reyes’ run-scoring single in the fourth got the Brewers on the scoreboard before the Marlins regained their five-run advantage on Jesus Aguilar’s RBI double in the bottom of the inning.

“Things haven’t gone our way,” said Brewers centre fielder Lorenzo Cain, who went hitless in four at bats. “All you have to do is keep grinding, put together good at bats and hope things change. I had a rough night myself. I need to step up and do better.”

Diaz had a potential fifth RBI overturned in the eighth after Duvall crossed the plate on his single to centre. The Brewers successfully challenged that catcher Jacob Nottingham tagged Duvall before he scored.

MORE ZEROES FROM THE BULLPEN:

The scoreless innings from Marlins relievers Friday reduced their E.R.A. to 2.02 over the last 19 games.

“It’s huge knowing the dudes we have in that bullpen,” Rogers said. “I know the first couple of series to begin the year it was kind of sketchy, but I knew the guys we had in the bullpen were studs. And they’ve been doing a fantastic job.”

The Brewers signed infielder-outfielder Hernan Perez to a minor league contract. Perez played with the Brewers from 2015 to 2019 and began the 2021 season with the Washington Nationals. He was designated for assignment on Tuesday.

Perez’s short tenure with the Nationals was remembered for his two relief pitching appearances in blowout losses. The 30-year-old Perez will report to the Brewers Triple A team in Nashville.

Brewers: C Manny Piña (fractured left toe) could be activated from the injured list before the conclusion of the series with Miami … C Omar Narvaez (left hamstring strain) is on a light running program and will play catch this weekend.

Marlins: OF Lewis Brinson (sore left middle finger) was not in the starting lineup Friday. … IF Jazz Chisholm (left hamstring strain) is doing defensive work and will face live pitching over the weekend.

LHP Adrian Hauser (2-3, 3.52) will start the middle game of the series for the Brewers on Saturday. The Marlins have not announced their starter.