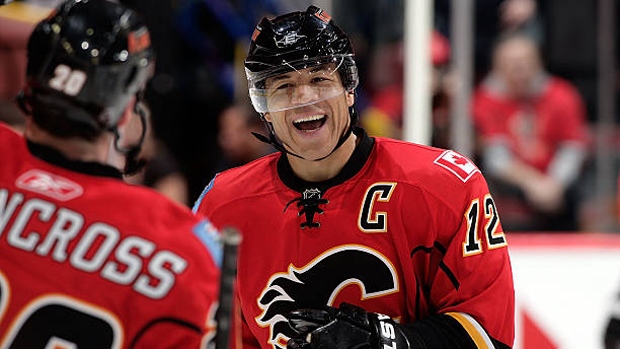 CALGARY — Jarome Iginla shed no tears, but generated laughs Monday as one of the NHL's premiere power forwards closed the book on a 20-year career.

The 41-year-old entertained a packed news conference at Scotiabank Saddledome, where he spent 16 seasons as a Calgary Flame and almost a decade as captain, with funny stories and his heartfelt love of hockey.

"I was very fortunate to have a very blessed career," Iginla said.

He bade farewell with the charisma and graciousness that made him a loved player in Calgary and admired throughout league.

That congeniality was always in contrast, however, to his feared fierceness on the ice.

"For about three or four years, I don't think there was a better player in the NHL. I think at times we did take him for granted.

"To know he's going to retire a Calgary Flame today is pretty special."

But few players have impacted a franchise the way Iginla did in Calgary, where he played from 1996 to 2013.

"Even though I was from Edmonton, nobody held it against me," Iginla said. "To get to play in Alberta was a real treat."

"For 16 years, Jarome set our culture," Flames president Ken King said. "When we look back, we had our own bona fide superstar."

Speed, power and gifted hands, with toughness that gave him room to employ those skills, made the six-foot-one, 210-pound right-winger difficult to contain.

That the captain and team's leading scorer frequently dropped the gloves made him unique in the league.

Iginla twice scored 50 goals in a season for the Flames, surpassed 40 goals four times and reached the 30-goal mark 11 times.

He led the Flames to the Stanley Cup final in 2004, when Calgary lost in seven games to the Tampa Bay Lightning.

But a Cup eluded Iginla in what will be a Hockey Hall of Fame career. The Flames didn't come close again during his tenure.

Calgary was about to miss the playoffs a fourth straight season when he was dealt to the Pittsburgh Penguins in March of 2013.

Iginla played for Boston, Colorado and Los Angeles to finish out his career.

He underwent hip surgery in 2017. Iginla skated with a minor pro team in February to test both his hip and the market for a possible return.

"It's not easy quitting and I found one of the hardest things was I always dreamed about being part of a winner and winning a Stanley Cup," he said.

"It took me a few days or a week when you realize you're not going to get that chance and that dream is not going to come true, but I have so many things to be thankful for."

A late invitation to the Canadian Olympic team camp in the summer 2001 — replacing an injured Simon Gagne — was a breakout moment for a young Iginla.

Iginla went on to win gold with Canada at the 2002 Olympic Games. Eight years later, he had a hand in one of the most historic goals in Canadian history.

His pass set up Sidney Crosby's Olympic overtime winner in the gold-medal game against the U.S. in Vancouver in 2010.

Crosby yelled "Iggy" and Iginla, who was getting hauled down by a U.S. defenceman, got a pass away from the boards to Crosby.

Iginla and his wife Kara now live in Boston where their three children play competitive hockey.