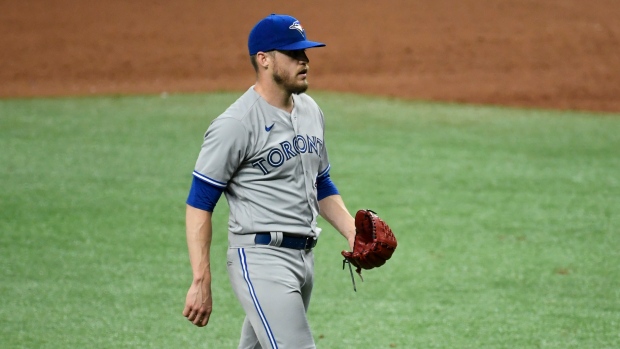 A forgettable season for Toronto Blue Jays closer Ken Giles all but ended Wednesday afternoon when a recurring right arm injury landed him back on the injured list.

After missing almost seven weeks with a forearm strain, Giles made two one-inning appearances in low-leverage situations — the latest coming in a blowout loss to the New York Yankees on Tuesday night — before shutting things down again.

Speaking on a video call with reporters before Wednesday night's game at Yankee Stadium, Blue Jays manager Charlie Montoyo said the team was waiting for results of an MRI exam.

"He gave it all he had and it just didn't work out," Montoyo said. "That's how he felt today so I wouldn't think he's coming back this year. That's just speculating, I don't know that for a fact. But there's not that much time left."

The regular season wraps Sept. 27, two days before the start of the playoffs.

Toronto entered play in third place in the American League East, a half-game behind the New York Yankees and four games behind the division-leading Tampa Bay Rays. The Blue Jays were holding the seventh seed in the AL post-season picture with the top eight teams making the cut.

The Blue Jays have used a closer-by-committee approach since Giles went down and that plan will continue. Anthony Bass and Rafael Dolis have been the team's primary ninth-inning relievers this season.

Giles led the major leagues in save percentage (95.8) in 2019 after converting all but one of 24 opportunities. He was limited to just four appearances this season.

In other moves, the Blue Jays optioned left-hander Anthony Kay and activated outfielder Teoscar Hernandez along with right-handers Hector Perez and Jacob Waguespack.

Outfielder Derek Fisher was also placed on the injured list. He was hit by a pitch in the right knee by Matt Shoemaker during Wednesday's batting practice.

Montoyo said Hernandez would only play in the Yankees series if he's needed on an emergency basis, adding the original plan was to activate him by the weekend.

Hernandez was enjoying a breakout season with 14 homers, 27 RBIs and a .308 average before going on the injured list on Sept. 6 with a left oblique strain.