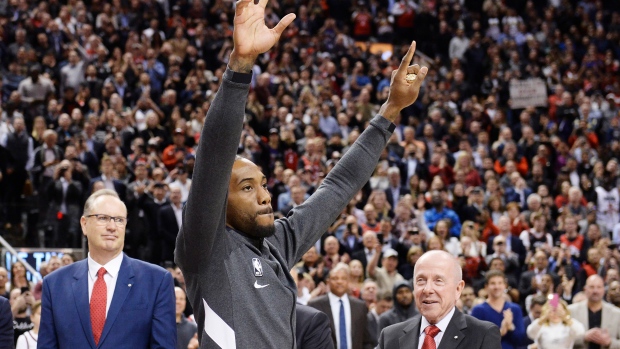 TORONTO — Kawhi Leonard got his championship ring and a standing ovation Wednesday as Raptor fans showed him the love in his return to Toronto with the Los Angeles Clippers.

It was back to the future as the Scotiabank Arena crowd chanted MVP in his honour one more time. On the floor, Leonard exchanged pre-game greetings and hugs with Larry Tanenbaum and other MLSE board bosses, president Masai Ujiri, GM Bobby Webster and coach Nick Nurse before working his way around his former teammates.

Last up was point guard Kyle Lowry, who presented him with his egg-sized ring at centre court.

"Congratulations Kawhi. The North thanks you," the PA announcer said.

Leonard was slated to have dinner with Lowry and his wife after the game.

Many of the fans who arrived early for the ring ceremony also left early as Leonard made the locals pay with a game-high 23 points, five rebounds and six assists in a 112-92 Clippers win. The former Raptor threw his body around with reckless abandon, diving on the floor in search of a loose ball in the second quarter and taking an inadvertent elbow to the face in the third without complaint.

Fans had been warned to arrive early for the ceremonies and arena was close to full during the anthems. The early arrivals included rapper/Raptors ambassador Drake, in his courtside perch.

The crowd noise swelled during the pre-game tribute video with Leonard and the other Clippers looking up to watch on the big screen.

The 110-second video went dark for several seconds building up to footage of Leonard's four-bounce series winner against the Philadelphia 76ers in the Eastern semifinal. Down below, Leonard's 'footsteps' lit up on the floor and a spotlight shone on the basket where he hit the famous shot.

For some not looking in the right direction, it was hard to tell whether the dramatic pause was intended or not.

A private superstar, Leonard became part of Toronto sports lore with that shot.

Leonard, who had predicted he might hear some boos, and Clippers coach Doc Rivers praised the Raptors for the warm tribute.

"It was great. It was a great moment. They did a great job putting it together," said Leonard.

Said Rivers: "I can tell you that ovation to him was very heartfelt, there's no doubt about that. And it meant a lot to him. I thought what the Raptors did overall — the video, the players coming out, all of them who played with him. That's the best that I've seen since I've been in the league, that's a really classy move by the organization and then by the fans as well."

The notoriously private Leonard had a full day — clocking 32:28 of playing time and just under 12 minutes total talking in two media scrums.

Leonard's latest load management challenge may be getting the ring through Customs. Manufacturer Baron Championship Rings of Windsor, Ont., says it is the largest-ever NBA championship ring — complete with more than 640 diamonds.

A closer examination would show a personal message on the inside of the ring — all the players got to choose their own. Leonard said he has his personal logo — the claw — and "like a FU symbol" — reminding him to wear it on his middle finger, given his San Antonio Spurs championship ring goes on another finger.

At least that was his explanation.

The six-foot-seven 225-pounder has experience with rings. Asked in the morning what he had done with the Spurs bauble, Leonard offered one of his trademark no-nonsense, dry replies.

"I wore it a few times and then kept it in a safe place," he said.

While he just played one season in Toronto, Leonard's ties continue to run deep.

"I'm going to be connected with Kawhi for life because of what we achieved last year," Nurse said prior to the game. "And all of us that were in that locker-room are.

"So we'll give him his ring, we'll shake his hand. Hopefully maybe even give him a big hug when we see him. And then when the ball goes up, the reality is we've got to get to playing and do everything we can to beat a great basketball team."

While downtown billboards heralded his return, the 28-year-old Leonard faced a media throng at the morning shootaround.

Leonard's five-minute scrum attracted 60-plus media members and a dozen cameras. An unfazed Leonard said simply he was happy to be back.

"Fun guy in town," read the caption at the outdoor screen at Scotiabank Arena next to a photo of Leonard celebrating the NBA championship win.

"Board man gets his ring," read the caption on the BMO Field screen beside a picture of Leonard holding up the trophy.

The references were to T-shirts Leonard famously wore.

At the downtown intersection of Yonge and Dundas, New Balance — a Leonard sponsor — and Leonard thanked the fans of Toronto on a giant billboard.

Leonard said he got "flashbacks" from the Raptors' victory parade as the Clippers came to the arena Wednesday morning.

"Obviously it was different playing here for a whole country. They're all going for this one team," he said. "The ride (with the Raptors) was fun. I had a great time last year with the coaching staff, the front office and the players. It was a great experience."

Leonard signed as a free agent with the Clippers in early July, less than a month after leading the Raptors to their first NBA title. He said he took his time making his decision, saying he thought long and hard about staying in Toronto.

"I gave it big consideration ... I talked to the front office in deep detail," he said. "It was a hard choice to make."

He returned to his native California after the Clippers swung a deal to get Paul George from Oklahoma City in exchange for Canadian Shai Gilgeous-Alexander and Danilo Gallinari plus five first-round draft picks.

Leonard signed a three-year max deal with the Clippers that could be worth nearly US$110 million, although the third season is at his option.

Leonard had an uneven game Nov. 11 when the two teams met in Los Angeles. Struggling on 2-for-11 shooting in the face of double coverage, he finished with 12 points, 11 rebounds, nine assists and nine turnovers in a 98-88 Clippers win.

Toronto got to see the real Kawhi on Wednesday, with the Raptors paying the price.