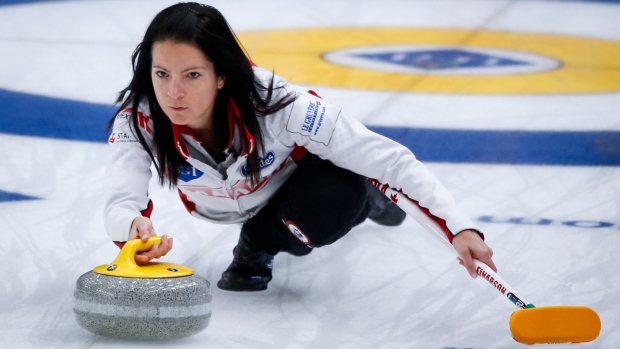 Einarson, who started the day in a tie for seventh place, finished round-robin play with a 7-6 record. The top six teams will make the playoffs and earn berths for their countries at the 2022 Winter Olympics.

The playoff picture at the 14-team event will become clearer later in the day. Afternoon and evening draws were on the schedule at WinSport's Markin MacPhail Centre.

The Canadian team put the early pressure on China and it paid off with some steals. Yu rubbed a guard in the first end to give Canada a deuce and Einarson stole a single in the fourth.

Canada stole another single in the eighth end and ran China out of stones in the 10th to win it.

At the start of the morning session, Canada was one of seven teams with a chance of earning one of the last three remaining playoff berths. Defending champion Silvana Tirininzoni of Switzeraland, Russia's Alina Kovaleva and reigning Olympic champion Anna Hasselborg of Sweden have already secured their spots.

After repeated negative tests from other members of the broadcast crew, Alberta Health approved a World Curling Federation proposal to resume coverage with minimal staff for the final three days of competition.

Staffers who tested positive remain in isolation and are being monitored by medical officials. Athletes and team officials are staying at a different hotel than the broadcast staff.

Canada is looking to return to the podium for the first time since Jennifer Jones won gold in 2018 at North Bay, Ont.

Chelsea Carey represented Canada in 2019 at Silkeborg, Denmark but didn't make the playoffs. Last year's championship was cancelled due to the pandemic.

Brendan Bottcher represented Canada at the world men's curling championship last month in the curling bubble. He reached the six-team playoffs but lost the qualification game.

This report by The Canadian Press was first published May 7, 2021.