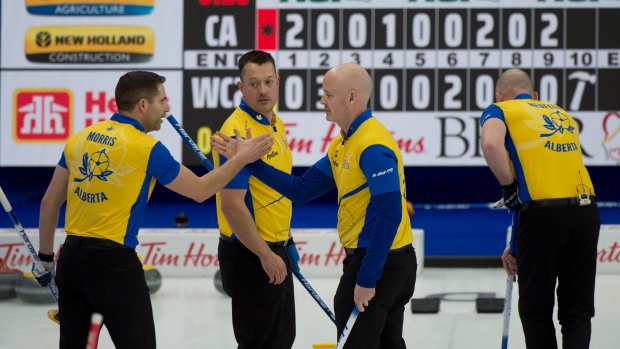 Kevin Koe started off his 2021-22 season with a win at the ATB Okotoks Classic.

The Calgary rink of Koe at skip, John Morris at third, BJ Neufeld at second and Ben Hebert at lead went a perfect 5-0, beating Scotland’s Ross Whyte in the championship game, 5-1.

Started the season with a W! 🏆
Thanks to @atbfinancial for their support of the Okotoks Classic and continued support of our team. Another great event hosted here by @OkotoksCurling. 👍
Next up for us: Swift Current in two weeks! pic.twitter.com/tJOwtOeGze

Koe defeated Brendan Bottcher in the semi-final, 6-4. It was a rematch of last year’s Tim Hortons Brier final, a game which Bottcher won, 4-2.

This was the first event of the season for Team Koe.

Headed to the Olympics

Peter De Cruz will represent Switzerland at the Winter Olympics for a second straight time after his Geneva rink swept Yannick Schwaller of Bern 4-0 in a seven-game series.

In Game 4, Team De Cruz scored a deuce in the 10th and final end for the 8-7 win and the ticket to Beijing.

At the 2018 Winter Olympics in Pyeongchang, South Korea, De Cruz defeated Team Koe of Canada in the bronze medal contest.

Chelsea Carey is skipping a new Saskatchewan-based team this season and the foursome has already found some early success.

The two-time Scotties champion joined forces with third Jolene Campbell, second Stephanie Schmidt and lead Jennifer Armstrong this off-season after sparing for Team Tracy Fleury at the national championship inside the Calgary bubble.

Team Carey went 6-0 over the three day event in Saskatoon.

Scotland’s Eve Muirhead won The Challenger bonspiel in Basel on Sunday, getting past Irene Schori, 7-5.

Sweden’s Anna Hasselborg fell in the other semi-final.

Other Results on Men’s Tour

Other Results on Women’s Tour