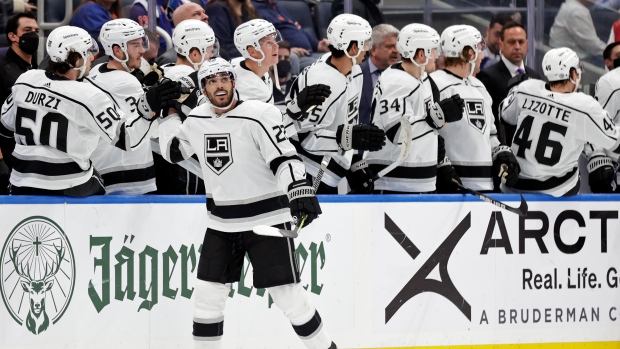 NEW YORK (AP) — Andreas Athanasiou scored and assisted on Quinton Byfield’s first NHL goal in his return from a long injury layoff, Cal Peterson made 23 saves and the Los Angeles Kings held off the New York Islanders 3-2 on Thursday night.

Adrian Kempe had an empty-net goal for the Kings, who won for the second time in three games against New York-area teams to start a six-game road trip.

Peterson, who improved to 10-6-1 on the season, also defeated the New Jersey Devils last Sunday. The Kings lost to the Rangers 3-2 in a shootout Monday, so Los Angeles has earned five of a possible six points in the three games.

“That was perfect, a great way to do it,″ said Kings defenseman Drew Doughty, who was playing his 1,000th game and assisted on Athanasiou’s goal along with fellow veteran Dustin Brown. "Cal has been playing well. I’m very happy for him.”

The Islanders finally managed to beat Peterson on Mathew Barzal’s ninth goal at 17:56 of the third.

Kempe scored his empty-netter to restore the two-goal margin at 19:24 with assists to Kings captain Anze Kopitar and Trevor Moore.

Casey Cizikas cut the Islanders' deficit to 3-2 with 19.3 seconds remaining to complete the scoring.

“The guys played hard right to the end,'' Kings coach Todd McLellan said. ”Ten years from now, guys will remember that Drew's special night was a win and everybody had a little piece of it."

Byfield opened the scoring with his first NHL goal at 17:05 of the first. The 19-year-old Byfield, a 6-foot-5 forward playing just his fourth game of the season and 10th of his career, fired a low shot past Semyon Varlamov. Byfield was the second overall pick in the 2020 draft after the Rangers took Alexis Lafreniere.

“I'm definitely super excited,'' Byfield said. ”To do it with this team and on Drew's 1,000th game night, it's a special moment ... I will remember it my whole life."

Athanasiou and the 37-year-old Brown — in his 18th season with the Kings — assisted on the goal. Athanasiou was playing for the first time since Dec. 14 after missing 16 games with a lower-body injury.

Athanasiou then scored at 19:54 of the second, his fourth goal of the season with assists to Brown and Doughty.

Brown has 20 points, including six goals, in 41 games this season. He has played 1,273 career games, while the 34-year-old Kopitar leads the Kings with 25 assists and 38 points overall.

Doughty, Brown and Kopitar along with goaltender Jonathan Quick form a quartet of Kings who won Stanley Cups in 2012 and 2014 and have been together since the 2008-09 season.

The 32-year-old Doughty was the second overall pick in the 2008 draft and also won the Norris Trophy in 2015-16 as the league's best defenseman. Doughty has 129 goals and 429 assists during his 14-year career. He became the fifth Kings player to appear in 1,000 games for the franchise, joining Brown, Kopitar, Dave Taylor and Luc Robitaille.

Doughty reflected on those lengthy bonds following his milestone game.

“They are my brothers. I love them very much,'' he said of his teammates. “I couldn't have done any of this without them. I'm very happy I could celebrate with them. They are the best.”

Varlamov made 27 saves in defeat for the Islanders, who were hosting the Kings for the first time since Feb. 6, 2020, a 5-3 win for New York at Nassau Coliseum.

The Islanders entered the contest with five straight home wins over Los Angeles; four at Barclays Center in Brooklyn and one at Nassau Coliseum.

"They were really good at breaking out the puck and making those smaller plays,'' Cizikas said of the Kings' patient style. “They were sitting back and waiting for their opportunities. They did a good job getting in lanes and making it tough for our defensemen."

Islanders defenseman Zdeno Chara, in his 24th NHL season, played in his 1,641st career game. The 44-year-old Chara is 10 games behind Chris Chelios’ record for NHL defensemen. Originally drafted by the Islanders in 1996, Chara is ninth all-time in games played and 586 games ahead of NHL ironman Keith Yandle of Philadelphia, who has played 1,075 total games.

NOTES: The teams meet again Feb. 26 at Crypto.com Arena in Los Angeles. ... The Kings scratched forwards Carl Grundstrom and Rasmus Kupari, plus D Jacob Moverare. ... The Islanders scratched forwards Kieffer Bellows and Ross Johnston, plus D Sebastian Aho. They continued to be without injured D Ryan Pulock, who hasn’t played since Nov. 15. ... Islanders D Scott Mayfield played in his 125th consecutive game. Only two other Islanders — forwards Zach Parise and Cal Clutterbuck — have played in all 36 games this season.