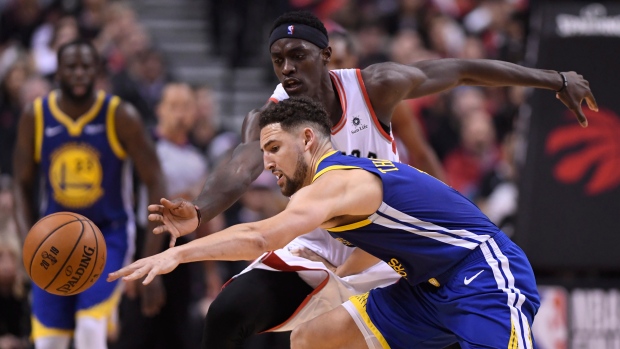 Klay Thompson pulled his hamstring in the Golden State Warriors' 109-104 Game 2 win over the Raptors on Sunday, but head coach Steve Kerr said postgame the injury is considered to be "minor".

Steve Kerr says Klay Thompson pulled his hamstring but that it is considered “minor.” Obviously a rather important thing to watch going into Game 3.

Thompson limped to the Warriors locker room after getting hurt early in the fourth quarter and tried to get teammates to take a foul at the Toronto end in order to stop the game so he could be subbed out.

Despite leaving early, Thompson still finished with a team-high 25 points on Sunday for the Warriors. After the game, he said he doesn't see himself missing Game 3.

“Klay said he’ll be fine, but Klay could be half dead and he would say he would be fine,” Kerr said. “We’ll see. He pulled his hamstring. He thinks it is minor, so I don’t know what that means going forward.”

Thompson wasn't the only Warrior to suffer an injury and leave Sunday's game. Big-man Kevon Looney suffered a chest contusion and did not return.

Looney had one rebound and zero points in 10:23 of action prior to his departure. He said he is "hoping" he will be a go for Game 3.