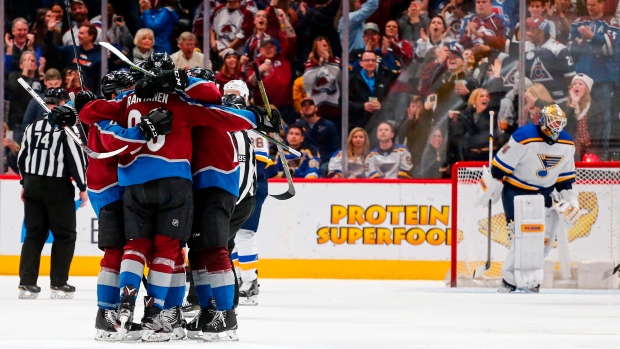 DENVER — Don't be fooled: That third-period lead isn't so safe.

Not this season, anyway. There's been quite a comeback for the comeback.

The NHL has seen 110 third-period comeback wins spanning 611 games through New Year's Eve. That's third-most in league history and not far off the 114 rallies in 2014-15 and 113 in '13-14, according to research by the NHL stats and information department.

Going into the new year, the only teams without a third-period comeback for a win in regulation were Carolina (0-13-2 when trailing after two) and Los Angeles (0-17-1). And the only team not to lose with a final-period lead remains Toronto, which is 19-0-0.

Translation: Don't leave early, because anything can and often does happen in the final period.

"Fans are getting what they want," joked Montreal forward Tomas Tatar said. "It's got to be pretty intense for them."

These days and in this speedy version of the game, no lead seems out of reach. Take Tampa Bay on Saturday: Down a goal in the third against Montreal, Adam Erne tied it up and then scored the game-winner with 1:02 remaining.

"There's no more of sitting back and closing and trying to suffocate the other team," Montreal coach Claude Julien said when his team was in Denver on Dec. 19. "It's a skating game now. With the skating game that's being allowed right now, there's more offence being showcased."

Try sitting on the puck to protect a lead with the likes of Connor McDavid, Sidney Crosby, Nikita Kucherov or Nathan MacKinnon attempting to swipe it away.

Good luck with that.

"The league is just getting faster and faster, young guys are coming through the league and they're really, really good skaters," Tatar said. "It's just a fast game. It's faster than ever."

Not only that, but these youngsters don't view things as erasing a deficit so much as an opportunity to crank up the intensity.

"Everybody is good throughout the lineup," Avalanche captain Gabriel Landeskog said. "That makes it that much harder to put teams away. It goes to show how many good players there are in the league and how many game-changers there are, that can turn things around."

And no slashing. Or holding. Or hooking. Defencemen need to be on their best behaviour.

"Defensively speaking, when you can't clutch and you can't grab — it's been that way for 10 years now — that really opens up the ice and allows guys to score," Avalanche defenceman Ian Cole said. "The guys are as skilled as they've ever been. Every year, they're more skilled and scoring more and more ridiculous highlight-reel goals. Guys are shooting from the goal-line and it's going off the side of the goalie's mask and in. Guys are doing stuff now that they haven't done before — or doing it more often.

"The skill level is as high as it's ever been in the league."

Hence, the volume of comebacks. This also helps when down: A positive attitude.

"You always have to believe. You can't give up," Tatar said. "And you don't have to. There's a big chance you score one or two goals and you're back in the game."

That was the case on Dec. 15 for Dallas, which fell behind the Avs 3-0 after one period and 4-2 after two. The Stars tied it up late in the final period before Colorado scored twice to earn the win.

"I don't feel comfortable with any lead until the buzzer sounds," Avalanche coach Jared Bednar said. "It's a tribute to the talent around the league. When teams start feeling it, they start coming at you in waves, and it's tough to defend."

That's why the best defence is sometimes to remain on the offensive. Don't sit back — keep striking.

"We're trying to stay aggressive," Landeskog said. "The O-zone is the best place to play defence. At least, that's the way we think about it. That's easier said than done. The team that's behind is always going to push."

Mikko Rantanen (17 goals, 45 assists) and MacKinnon (24 goals, 35 assists) get the lion's share of the credit on the high-scoring top line for Colorado.

Chalk up another assist for Rantanen, though, because he wanted to make sure Landeskog received full credit, too. Landeskog's tied for the team lead with 24 goals.

"He flies under the radar," Rantanen said. "The way he plays the game is the right way always. That's real fun to watch."

The 2020 Winter Classic will be held at the Cotton Bowl in Texas. Dallas will host the 12th edition of the NHL's annual outdoor game on New Year's Day against an opponent yet to be determined. Commissioner Gary Bettman also said the Heritage Classic will return on Oct. 26 when Winnipeg plays Calgary at Mosaic Stadium in Regina, Saskatchewan. In addition, the NHL will bring an outdoor game to the Air Force Academy on Feb. 15, 2020, as part of the Stadium Series. Colorado will play a team not yet announced.

John Tavares leads Toronto against Minnesota on Thursday. Tavares is two goals shy of 300 for his career. He was the first overall pick by the New York Islanders in 2009.