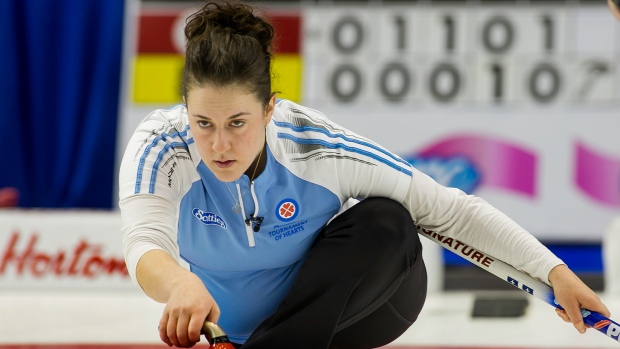 HUGE shoutout to all the organizers of the @Stusellsto Toronto Tankard, Matt Wilkinson, and Gerry from @CurlingZone who put so much work into making this event as safe as possible! 😷 pic.twitter.com/1YHn95kfVg

The event actually took place in Waterloo, Ont., at the KW Granite Club.

The 35-year-old Mann has made two appearances at the Scotties Tournament of Hearts for Quebec in 2015 and 2017.

On the men's side of the draw, Toronto's Team John Epping defeated provincial rival Team Glenn Howard in the final, 3-2.

Huge thank you to @Stusellsto for your amazing support of #curling.
Thank you to our sponsors, fans, friends and family cheering us on 🧡 and let's not forget super spare @patjanssen15 pic.twitter.com/O3HYxr1g9t

Epping scored a single in the 8th and final end to seal the victory.

Happy Thanksgiving everyone! Wasn't the finish we were hoping for in the final today, but we still have so much to be grateful for. We're thankful the Airdrie Curling Club was able to put on an extremely well-run & safe WCT event. 🥌🥌🥌 #TeamSturmay pic.twitter.com/oZAgPHRykV

It was great to get back out there this weekend but it didn't go our way this morning. We want to send out a big thanks to everyone in Airdrie for hosting a good event and keeping everyone safe. Next for us is the @atbfinancial Banff Classic starting later this week! pic.twitter.com/Bg115Wc7K8

Earlier this week, the remaining games of a Saskatchewan women's qualifying event in Regina were called off after organizers became aware of someone who had recently tested positive for COVID-19 after entering the Highland Curling Club on Oct. 4.