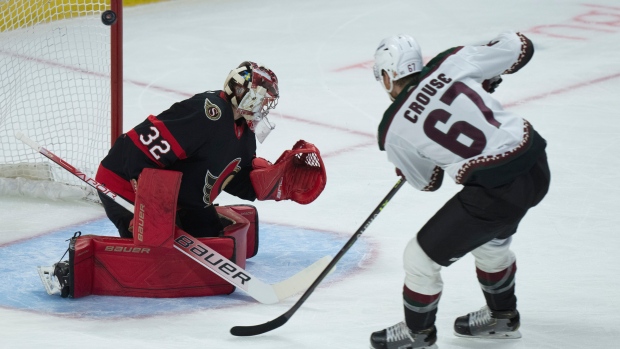 OTTAWA — There was a collective sigh of disappointment from the Ottawa Senators on Monday night following a 5-3 loss to the Arizona Coyotes.

It was hard to argue that the Senators didn't deserve a better fate considering they dominated play for much of the night, but a couple of mistakes were the difference.

"I think there was a stretch over 20-some minutes that they didn’t have a shot and we’ve got to find ways to score and our power play can't give up a shorthanded goal," said Senators coach D.J. Smith. "We tie it in the third after having the puck the whole time and we make a real careless play and you lose the game."

Give the Coyotes credit, they capitalized on their chances.

With just 15 shots on goal they didn't generate a lot of offence, but when the Senators faltered they took advantage.

Tied 2-2 after the first period, the Coyotes took the lead when Lawson Crouse scored his third of the game, shorthanded, late in the second after taking advantage of a Senators giveway and winning a foot race for a loose puck to break in alone.

Ottawa tied things up at the seven-minute mark of the third when Connor Brown buried a Brady Tkachuk rebound, but 16 seconds later the Coyotes regained the lead as Nick Schmaltz took a pass in front and beat a sprawled Gustavsson.

"Yeah it's on the guys on the ice," said Tkachuk. "It's happening to our line in back-to-back games so we've got to learn from those and not let it happen again. The momentum was on our side and that completely deflates the group so as a line we have to buckle up in those situations and have to learn from that. It's definitely frustrating."

The Coyotes beat the Senators 8-5 nine days ago and have played well of late, but know this was not one of their better efforts.

"In that kind of a game, you can look at it two ways," said Arizona coach Andre Tourigny. "You can look at our performance, and really, it was not very good. Let's not kid ourselves. But you can look at it as well saying, even though it was not as good as we wanted, we found a way to stay with it. We knew we could win the game even if we did not play the way we wanted to."

Crouse's three goals were all scored differently, one at even strength, one on the power play and shorthanded. Barrett Hayton had an empty-net goal to round out the Coyotes scoring.

Scott Wedgewood made 40 saves to pick up his tenth win of the season.

"It's a special feeling," said Crouse. "I've said it in a few interviews now: You always want to be out there and try to make the biggest difference you can make. And to get my first hat trick tonight in front of some friends and family, it's a really good feeling. To cap it off with a win makes it that much more special.”

Josh Norris scored twice for the Senators (21-33-5), while Filip Gustavsson, in his first NHL start since Feb. 20, stopped ten shots.

Norris looked dejected following the game as he met the media.

"I thought we deserved a lot better," he said. "We did a lot of really good things and we've just got to take care of the puck, not give up a shorty and probably win the game so it's frustrating."

While Tkachuk often points out the team is still young and learning, on this night they were all held accountable.

"I think with our group, we don't want to make any excuses whether young or old we just want to win," he said. "Everyone wants to win and has the mindset of winning every single day. So yeah, we're not gonna make any excuses or feel sorry for ourselves."

An eventful first period saw the teams tied 2-2 after the opening 20 minutes.

Norris scored his first, jamming home a Tkachuk rebound. The Coyotes went on to take the lead when Crouse scored back-to-back goals. The first was a great shot high glove side and the second was on the power play as he tipped a Shayne Gostisbehere point shot.

Norris tied the game on the power play with his second of the night.

Notes: After he was a healthy scratch the last five games Tyler Ennis drew back into the Sens lineup tonight in place of Adam Gaudette. Coyotes defenceman Jakob Chychrun suffered a lower-body injury on Saturday night versus the Boston Bruins and will be out of the lineup two to four weeks.

This report by The Canadian Press was first published March 14, 2022.