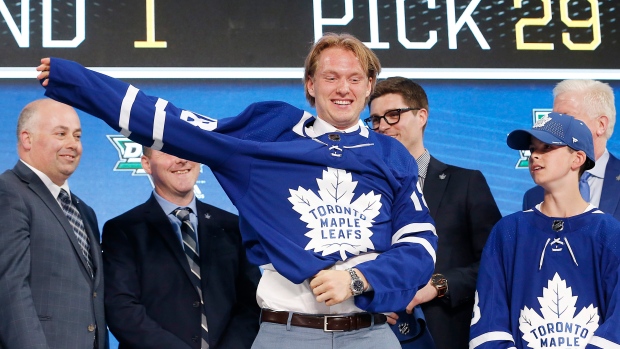 DALLAS — Rasmus Sandin had an inkling the Toronto Maple Leafs would be calling his name after meeting with management before the NHL draft.

The 18-year-old defenceman's intuition turned out to be spot on.

Toronto traded down from No. 25 to No. 29 before selecting Sandin in the first round of the draft Friday.

"The questions were pretty deep," Sandin said of his interview with the Leafs. "I felt like they actually cared and they wanted to know about me.

"That was a positive feeling."

The native of Uppsala, Sweden, produced 12 goals and 45 points in 51 regular-season games with the Ontario Hockey League's Sault Ste. Marie Greyhounds in 2017-18.

"He was the player that our scouts had rated as the top guy," said Leafs rookie GM Kyle Dubas, who was with the Greyhounds before going to Toronto in 2014. "Playing in the Soo allows me some greater familiarity with people and greater insights.

"We're fortunate in that regard."

Sandin, who says he models his style of play after Chicago Blackhawks blue liner Duncan Keith, was ranked No. 11 amongst North American skaters by the NHL's Central Scouting Bureau heading into the draft.

He sat 16th at the midway point of the season.

"I think he plays the position the way we want it to be played," Dubas said. "He defends very, very well."

The five-foot-11, 186-pounder got a brief taste of pro hockey in his home country, playing five games with Rogue of the Swedish Hockey League before joining the Greyhounds.

"It was awesome to hug it out with family and my friends," Sandin said of the moment his name was called. "It's an awesome feeling right now."

The Leafs entered the draft with the 25th pick, but Dubas swapped it with the St. Louis Blues for the 29th and 76th pick moments before it was Toronto's turn to make its original selection.

St. Louis used the 25th pick to select German winger Dominik Bokk, who spent the 2017-18 season playing for the Vaxjo Lakers of the Swedish Hockey League.

Dubas also traded down twice in the first round of the 2015 draft as co-interim GM of the Leafs with Mark Hunter after Dave Nonis was fired and before Lou Lamoriello joined the organization.

Sandin is the second straight defencemen out of Sweden that Toronto used its first-round pick on after taking Timothy Liljegren 17th overall in 2017.

Toronto also has Swedish blue liners Andreas Borgman and Calle Rosen in the system. They finished the 2017-18 season as part of the Calder Cup champion Toronto Marlies alongside Liljegren.