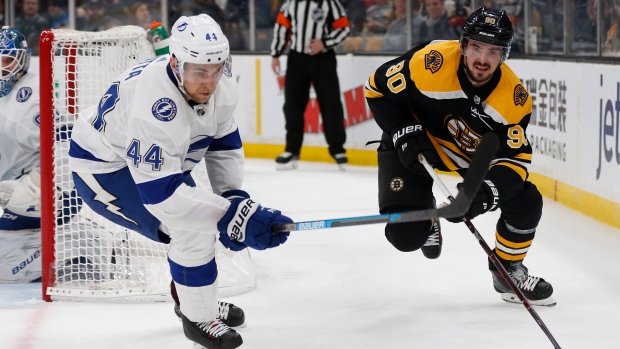 The Lightning matched an NHL record with their 62nd win, using a three-goal second period to beat the Boston Bruins 6-3 on Saturday.

"Sixty-two is a number that's only been touched once and for a team that's kind of been locked into a playoff spot for quite some time, to be able to bring it every single night, to continue to find a way to get that number is a credit to the players and staff," coach Jon Cooper said. "We didn't sit there and circle 62 and say that's going to be our number, but it's kind of cool that we actually got to that number."

Kucherov, Anthony Cirelli and Braydon Coburn each had a goal and an assist for Tampa Bay (62-16-4), which tied the 1995-96 Detroit Red Wings for most victories during the regular season. Steven Stamkos got a short-handed goal during the second, and Erik Cernak also scored during the period.

The Lightning earned six of their wins in shootouts. The league introduced shootouts to decide ties after overtime at the start of the 2005-06 season. Before that, games ended in ties after overtime, which was brought in for regular-season games in 1983.

Kucherov finished with 41 goals and 87 assists, putting him in position to win the Art Ross Trophy awarded to the NHL's leading scorer. He also broke Alexander Mogilny's single-season record for most points for a Russian-born player.

"Couple days of rest and a couple practices and that's it. Best time of year," said Rask, who was presented with a painting during a pregame ceremony for becoming the team's winningest goaltender earlier this season.

Kucherov got his record-setting point when he assisted on Johnson's 29th of the season with 1:26 remaining. Johnson raced to the net to grab the puck and then embraced Kucherov near the blue line in front of Tampa Bay's bench.

"It's definitely a special moment," Kucherov said. "Thanks to everybody here in the room and thanks to the guys helping me out. It's a team effort and everybody is involved in my success."

It was the Lightning's 30th road win, making them just the second team in league history to reach that total. The 2005-06 Red Wings had 31.

Both teams rested a couple key players. Boston's group included top-line players Patrice Bergeron and Brad Marchand, who was the first Bruins player with 100 points in a season since Joe Thornton in 2002-03.

"I'm an optimist. I like our team," Boston coach Bruce Cassidy said. "We play hard. We're one of the better teams start to finish in the National Hockey League."

Trailing 2-1, Stamkos stole a pass and went in all alone, shifting around Rask before tucking a backhander into the net midway into the second. Cirelli's goal 4:07 later moved the Lightning ahead 3-2. Kucherov scored 53 seconds into the third.

Boston jumped in front on Krejci's 20th of the season 14:38 into the game. Charlie McAvoy was originally given the goal after he collected a loose puck and fired it at the net as Krejci was charging toward the front.

Heinen beat Pasquale with a rising wrist shot inside the left post to make it 2-0 with 19.1 seconds left in the opening period. Cernak slipped a wrist shot past Rask from the slot for a power-play goal 4:41 into the second.

Lightning: Host Columbus or Carolina in the first game of the opening-round of the playoffs this week.

Bruins: Host Toronto in Game 1 of the first round, likely beginning Thursday.