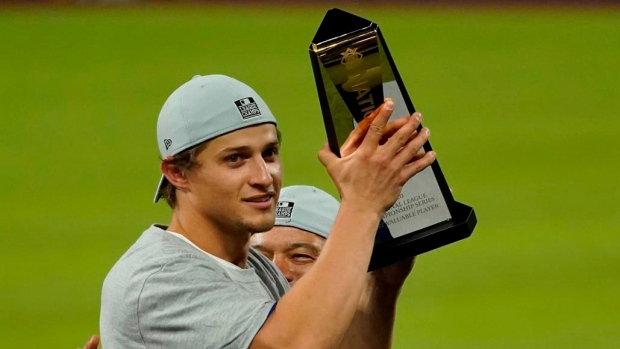 Once the Los Angeles Dodgers finally finished off the Atlanta Braves, the choice was obvious.

Seager helped power Los Angeles to its third World Series in four years, and another chance to win its first title since 1988. The sweet-swinging shortstop set NLCS records with five homers and 11 RBIs as the Dodgers eliminated the Braves in seven games.

Even though he went 0 for 5 and left five runners on base in the Dodgers’ clinching 4-3 win Sunday night, Seager homered three times in the previous two games when they were also facing elimination.

“Obviously it wasn’t just me. That was a complete team effort right there,” Seager said. “Absolutely grinded throughout that series. That was a test every single night. We’re up for the next one too.”

The Dodgers, who stay in Texas to play Tampa Bay in the World Series, matched an LCS record with their 16 homers. That included clutch drives by Kiké Hernández and Cody Bellinger in Game 7.

Seager, the 2016 NL Rookie of the Year, homered twice in a 7-3 win in Game 5 on Friday night. The next day, his solo homer ignited a three-run first inning that was more than enough as Walker Buehler pitched six scoreless innings in a 3-1 win.

There was a stretch of five consecutive plate appearances when Seager drove in a run — his last two at-bats in Game 2 and his first three in Game 3. That had only been done once before in the post-season, by Houston's Carlos Beltran in 2004.

Seager's six homers and 15 RBIs overall are already Dodgers records for a single post-season — passing the five homers by Davey Lopes in 1978 and Justin Turner's 14 RBIs three years ago. Seager is the first shortstop with more than three homers in any series in MLB post-season history.

First-year Dodgers right fielder Mookie Betts, the 2018 AL MVP, said he didn’t know much about Seager before he got to LA this year, other than he was a “good shortstop, could swing it a little bit.”

Now they are going to the World Series together. Betts was on the opposite side when the Red Sox beat the Dodgers in five games in 2018, and Seager wasn't playing. He got in only 26 games early that season before Tommy John surgery on his right elbow, and then had a left hip issue addressed with an arthroscopic procedure.

“He’s like a brother to me just like everybody else,” Betts said after Game 7. “I have one job, just to get on base and let him hit me in. He’s been like this all year. We get spoiled by it every day. What he is doing is amazing for sure.”

Seager is hitting .298 with 10 extra-base hits and a Dodgers-high 13 runs scored in their 12 playoff games so far.

In 31 post-season games before this year, Seager hit .203 with three homers and 10 RBIs. He hit .237 during the 2017 post-season, when he hurt his back in the NL Division Series, then missed all of the NLCS before returning in the World Series. He hit only .150 in the five-game NL Division Series last year, when the Dodgers lost to Washington.

Seager hit .272 with 19 homers and 87 RBIs over 134 regular-season games in 2019. After hitting .307 with 15 homers and 41 RBIs in 52 games during this pandemic-shortened regular season, Seager carried his hot bat into the post-season.

“As far as the post-season, just understanding that at times they’re going to try to not throw strikes to him because of how dangerous he is,” manager Dave Roberts said during the Braves series. “He’s been as good in the zone this post-season, by far, than he’s ever been.”