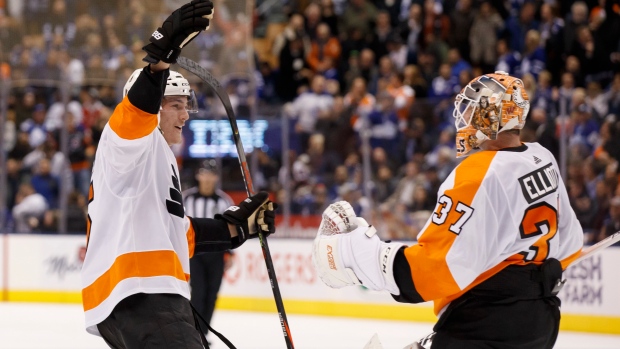 TORONTO — Mike Babcock stepped to the microphone after the Maple Leafs' 3-2 shootout loss Saturday and answered the only question on the minds of Toronto fans before he was even asked.

Bad enough to keep the star winger at home when the team travels to Chicago to meet the Blackhawks on Sunday, said the head coach.

After that, it's anyone's guess.

"I don't know the extent (of the injury)," Babcock added later. "I don't know if it's a few days or weeks or whatever.

"There's no sense on dwelling on it."

As for the game itself, Sean Couturier scored the winner in the shootout for the Philadelphia Flyers on a night that saw Toronto battle back from down two goals early to grab a point without one of its stars.

"We knew there was a lot of hockey left," Leafs captain John Tavares said. "I don't think we ever felt terrible about the way we were playing."

Toronto went a club record 11 rounds to beat Philadelphia 4-3 in a shootout in the City of Brotherly Love last weekend.

It took the Flyers just three shots to return the favour as Couturier ended it on a smooth deke after Claude Giroux blasted a slapshot past Leafs goalie Frederik Andersen.

William Nylander, who had a goal and an assist in regulation, scored on his attempt for Toronto. Tavares was stopped by Flyers goalie Brian Elliott, while Auston Matthews hit the post after setting up both Leafs goals in normal time.

"They got the second point and we didn't."

Phillipe Myers and Oskar Lindblom scored in regulation for Philadelphia (9-5-2), which got 38 stops from Elliott through 65 minutes of action.

Travis Dermott had the other goal for Toronto (9-5-4). Andersen made 30 stops for the Leafs, who saw their season-high three-game winning streak come to an end.

Kevin Hayes hit the post in overtime for Philadelphia before Ivan Provorov deked Andersen to the ice, but sent his backhand wide. Toronto got a power play late in the extra period, but Elliott was there to deny Nylander at the buzzer.

The Flyers, who visit the Boston Bruins on Sunday, now have points in five straight (4-0-1). The Leafs, meanwhile, are 4-1-2 over their last seven.

"That last game in our building and tonight, they're hard-fought games," Flyers head coach Alain Vigneault said. "Our focus was on bringing a real strong game on the road.

After Andersen robbed Andy Andreoff and Michael Raffl in quick succession on a sequence that had fans at Scotiabank Arena chanting the Toronto netminder's name to keep the Leafs down only 2-1 early in the third, Nylander tied it less than a minute later.

Matthews tried the lacrosse move where a player picks the puck up on his stick and attempts to tuck it in the top corner from behind Elliott's net, but instead slid a pass to Nylander in front for his fifth at 3:58.

"He was trying (the lacrosse play), but didn't get it up on his stick," Nylander said. "It was close, but it ended up right on my tape."

Trevor Moore nearly won it for the Leafs with three minutes left in regulation only to see his shot ring off the crossbar to set up overtime and the shootout.

"I was like, 'Let's see how long this one's going to go,'" said Elliott, who was in goal for last Saturday's marathon. "Our guys tucked a couple in ... we stuck to our guns."

Marner was hurt after falling awkwardly on his right leg off the second period's opening faceoff. The 22-year-old struggled mightily to get to the bench and went the locker room. He returned during a television timeout to test the ankle, but once again headed off and was done for the night.

"Hopefully he's fine," Dermott said. "If we lose him, it's a massive part of our squad."

Philadelphia led 2-0 after the first, but Toronto got on the board at 10:11 of the second when Nylander found Dermott off the rush.

The defenceman, who suffered a shoulder injury that required surgery in last spring's playoffs, was playing just his fifth game of 2019-20 and scored his first goal since early February.

Philadelphia opened the scoring at 8:08 the first when former Leafs winger James van Riemsdyk passed to Myers, who made no mistake through a partial screen for his second.

The third goal of the rookie blue-liner's NHL career was also the 12th time in 17 games Toronto has fallen behind 1-0 this season.

The Flyers connected on their second power play late in the first when Lindblom deftly deflected Travis Konecny's shot at the side off the net for his eighth at 1:32 before the Leafs eventually made a push without Marner.

"We just tried to stick with it and claw our way back," Matthew said. "Forced overtime, but you really want to get that extra point."

And like Leafs fans, they'll also want news soon on their fallen teammate.

Note: Kade Foster, the 11-year-old from Corner Brook, N.L., who made waves on social media last weekend when no one showed up to his birthday party, was in attendance with his family as guests of the Leafs and Air Canada. Kade's father tweeted about his son's disappointing birthday — tagging the team, Marner and Tavares in the post. The players, team, Prime Minister Justin Trudeau and a number of celebrities responded with an outpouring of online support.