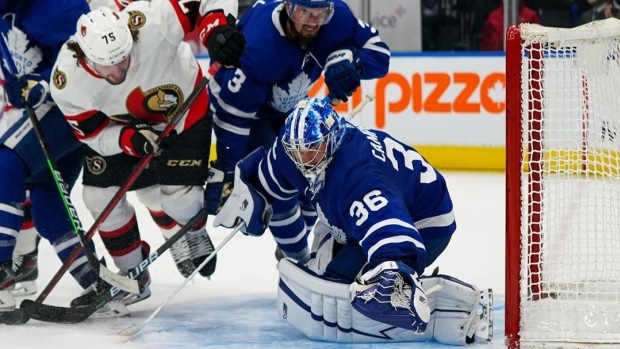 TORONTO — Just as captain John Tavares put an exclamation point on his pre-season to erase any doubt about his full recovery from his scary playoff injury, another question cropped up with the Maple Leafs on Saturday.

Ilya Mikheyev, the left wing on Tavares' second line, suffered a hand injury late in the first period of the Maple Leafs' 4-1 win over the Ottawa Senators.

Toronto coach Sheldon Keefe classified Mikheyev's injury as "not short term." Keefe said more on the seriousness of the setback would be known on Monday.

Mikheyev fell awkwardly on both hands when he was knocked down to the ice by Senators defenceman Dillon Heatherington. The winger did not return for the final 40 minutes.

"He's had a great camp," Keefe said of Mikheyev. "He's a good player for us. He does a lot of good things for us. But we have a lot of depth. We have a lot of guys who had good camps here and down with the Marlies.

"Somebody is going to get an opportunity with this."

Tavares, who scored a goal and an assist in the Maple Leafs' win to end the pre-season, was pulling for his linemate.

"I hope it's nothing major," Tavares said. "I know how determined he is to grow his game and wanting to be a difference-maker in all areas of the game. He's had a tremendous camp and come in with a great attitude.

"Every year, he comes in in tremendous shape. He's a machine that way. You can see the speed he has and the impact he can make."

The three remaining left wings for the Maple Leafs had strong games with the extra work after Mikheyev's departure. Nick Ritchie scored to put the Maple Leafs ahead 2-1 early in the second period, and Pierre Engvall converted a pass from Tavares for the 3-1 goal, six seconds after an Ottawa penalty expired.

Michael Bunting also had a strong game with his enthusiastic play.

Tavares, meanwhile, has a history of successful comebacks. He was knocked out of the Olympics and subsequently the rest of the 2013-14 season when he suffered a torn medial collateral ligament and a torn meniscus in his knee in the quarterfinals against Latvia. He returned the following year to finish second in the scoring race and second in the Hart Trophy voting.

But players never know how they will recover from a concussion, especially a scary incident like Tavares endured last spring when his face hit the knee of Montreal Canadiens forward Corey Perry as he was falling after a bodycheck from defenceman Ben Chiarot.

"Things have gone really good," Tavares said. "I just want to keep building from it.

"Overall, things continue to build. It's now time to get back to the long grind, 82 games and excited about another opportunity."

Keefe praised Tavares for his leadership in training camp. However, the Maple Leafs coach also admitted his captain's health was a concern when camp began two weeks ago. That's why Tavares was inserted into the lineup in the first game.

"It hasn't been on my mind since," Keefe said.

The Maple Leafs have until 5 p.m. ET on Monday to submit their opening day roster. Alex Biega and Kurtis Gabriel were placed on waivers on Saturday.

Whether or not Auston Matthews will be in the lineup for the Maple Leafs' opener at home against the Montreal Canadiens on Wednesday has yet to be determined.

Keefe stated he'll "have a better sense of where (Matthews is) at."

The Maple Leafs (5-1-0) won four in a row to end their pre-season slate. After they play Montreal on Wednesday, the Maple Leafs travel to Ottawa to play the Senators (3-4-0) in their season opener.

"We ready to rock," claimed Toronto defenceman Morgan Rielly, who opened the scoring on Saturday before 11,252 at Scotiabank Arena with a power-play goal.

Alex Formenton tied the game in the final minute of the opening period.

This report by The Canadian Press was first published Oct. 9, 2021.