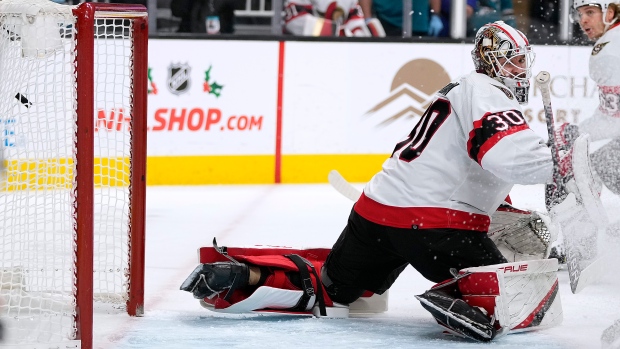 Matt Murray dropped to 0-5 to start the season as he allowed four goals on 23 shots in the Ottawa Senators 6-3 loss to the San Jose Sharks on Wednesday.

Senators head coach D.J. Smith pointed to goaltending as the separating factor between his team and the Sharks, who had James Reimer stop 23 of the 26 shots he faced.

Dreger: Feels like Matt Murray is running out of runway

TSN Hockey Insider Darren Dreger joins Graham to help get you set for Sens @ Sharks and breakdown the latest topics around the entire NHL!

With Murray limited by injuries and time in the COVID protocol this season, Filip Gustavsson has appeared in eight games, posting a 3-4-1 record with a .905 save percentage and a 3.41 goals-against average. Anton Forsberg has also seen time in five games this year, going 1-3 with an .884 save percentage and a 4.56 GAA.

The Senators, who dropped to 4-12-1 with Wednesday's loss, will visit the Anaheim Ducks on Friday.