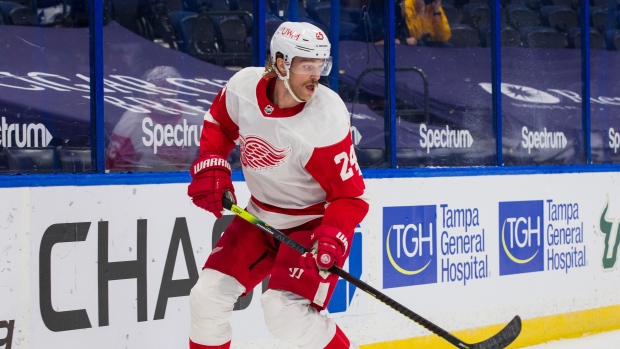 MONTREAL — The Montreal Canadiens have bolstered their blue-line depth ahead of the NHL trade deadline.

The club acquired veteran defenceman Jon Merrill from the Detroit Red Wings on Sunday for a fifth-round draft pick in 2021 and minor-league forward Hayden Verbeek.

Merrill appeared in 36 games with the Red Wings in 2020-21, picking up five assists while averaging nearly 20 minutes of ice time. The 29-year-old from Oklahoma City has 12 goals and 66 points in 392 career regular-season games with the New Jersey Devils, Vegas Golden Knights and Red Wings since making his NHL debut in 2013-14.

The league's trade deadline is set for Monday at 3 p.m. ET.

Merrill was selected 38th overall by the Devils in the 2010 NHL draft.

Verbeek, 23, had one goal and two assists with Laval Rocket of the American Hockey League this season. The pick heading to Detroit in the trade previously belonged to the Ottawa Senators.

This report by The Canadian Press was first published April 11, 2021.