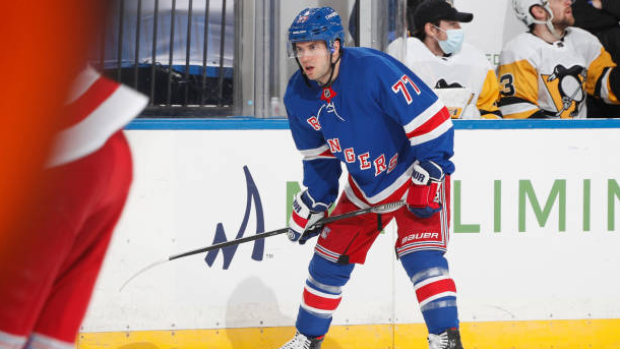 The 25-year-old went unclaimed after being waived on Sunday following a reported physical altercation with goaltender Alexander Georgiev on Saturday night, according to the New York Post's Larry Brooks.

“There’s always rumours, so I’m not going to address rumours,” Quinn said, per the New York Post. “This isn’t about one incident, it’s not about one thing. This is a situation the organization felt was best at this current time. We’ll see how the situation plays out.

"It’s a decision we made as an organization," Quinn added. “In 24 hours, we’ll be able to probably be a little bit more specific and address the situation differently.”

Gorton said Saturday's incident was a final straw for DeAngelo, who was a healthy scratch for the second and third games of the season following an unsportsmanlike conduct penalty in their 4-0 season-opening loss to the New York Islanders, something that player "wasn't able to move on from."

Gorton says DeAngelo "wasn't able to move on" from being healthy scratch for gms 2+3 of season after unsportsmanlike penalty. "I told him if his name came up in anything at all that he would be on waivers ...

"I felt like I had to stay true to my word, the organization's word."

"I told him if his name came up in [any further incidents] that he would be on waivers...I felt like I had to stay true to my word, the organization's word," Gorton said.

Earlier on Monday,  TSN Hockey Insider Darren Dreger reported that DeAngelo's agent Pat Brisson and Gorton were talking with teams with trade interest in the player.

Spoke with DeAngelo’s agent, Pat Brisson. He says he and Rangers GM Jeff Gorton are talking with clubs with trade interest in DeAngelo. Brisson is confident they will get something done in the near future. In the meantime, DeAngelo will remain at home awaiting a deal.

Dreger notes that Brisson is confident they will get something done in the near future and that DeAngelo will remain at home in the meantime awaiting a deal.

He signed a two-year, $9.6 million contract in October and carries a $4.8 million cap hit.