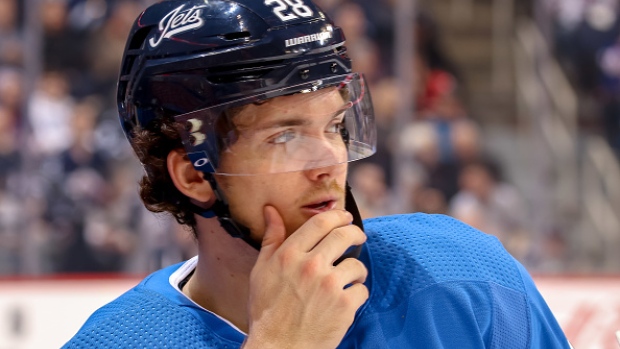 Winnipeg Jets forward Jack Roslovic parted ways his agent on Wednesday, with Aaron Portzline of The Athletic reporting on Twitter that the 22-year-old asked for a trade at least once last season because he was unhappy with his role on the team.

Roslovic's former agent, Kenneth Robinson, responded to Portzline on Twitter and, while he confirmed Roslovic was not happy on the team's fourth line, he denied that the winger ever requested a trade.

"First, Jack never once asked for a trade from the Jets. He was disappointed with his role, but he had every right to be," Robinson wrote. "He wasn’t on the 4th line (because) he was a 4th line player. It was just a real frustrating situation on the Jets... but things will get better for him.

"Second, Jack is as solid as they come. He is hardworking, thoughtful, decent and thankful for all of his blessings. He is a terrific role model for young people because of who he has become. He loves his family. He is a good friend. He is charitable. And I am proud my son looks up to him... even after he fired me. I’ll always be a fan of his."

Aaron, you always have been an excellent reporter. Always my first read. I know u won’t mind a correction. First, Jack never once asked for a trade from the Jets. He was disappointed with his role, but he had every right to be. s

Roslovic played in a career-high 77 games this season, scoring nine goals and posting 24 points while averaging under 10 minutes of ice time per game. He was held pointless point in six playoff games, with his average ice time dropping to 8:29.

The 2015 first-round pick of the Jets is signed through next season under his entry-level contract.

The Philadelphia Flyers acquired the rights to pending unrestricted free agent Kevin Hayes on Monday in hopes of filling their No. 2 centre spot.

However, if the team fails to get Hayes under contract, Sam Carchidi of The Philadelphia Inquirer suggests the team could pursue Nazem Kadri from the Toronto Maple Leafs to fill the void.

Flyers general manager Chuck Fletcher left the door open to trading the team's first-round pick last week and Carchidi believes Kadri could fit what the team is looking for.

"We’d certainly consider trading our pick if can get a good player," Fletcher said at the NHL combine. "I don’t think we’re looking to trade the 11th overall pick for a 31-year-old player with one year left on his deal, but if we can get a good player at the right stage of his career and with some term left on his contact, we’d certainly look at it.”

Kadri, 28, is signed for three more seasons at a $4.5 million cap hit. He scored 16 goals and posted 44 points this season in a reduced role after scoring 32 goals in each of the previous two seasons.

Carchidi notes that the Flyers could also use their top pick to pursue Jacob Trouba from the Winnipeg Jets, William Nylander from the Maple Leafs or Jason Zucker or Jared Spurgeon, who Fletcher had on his roster as general manager of the Minnesota Wild.

The Athletic released their NHL trade board of 20 players who could be moved this summer on Wednesday with Trouba taking the top spot.

The TSN Trade Bait top five is currently Kessel, Trouba, Zucker, Nikita Zaitsev and P.K. Subban. While Brodie is not listed on the TSN Trade Bait board, his fellow Calgary Flames blueliner Travis Hamonic sits at No. 11, with TSN Hockey Insider Bob McKenzie reporting the team is willing to deal one of the two this summer.

“I’ve been hearing a lot that Calgary is very intent on moving a defenceman, either Travis Hamonic or TJ Brodie. Brodie and Hamonic are two names we’re hearing a lot of because the Flames have good young defencemen they feel can take over for one of those guys," McKenzie said on the TSN Hockey Bobcast last week.

"And also like when I mentioned the Michael Frolik potential trade, they are trying to free up dollars to be able to sign restricted free agent Matthew Tkachuk.”