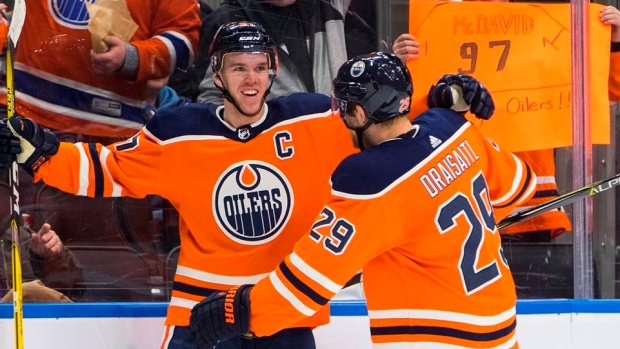 Since the 2004-05 lockout, the National Hockey League has observed an interesting – if gradual – change in scoring. In the early years immediately after the lockout, it seemed as though goals were nearly impossible to come by after the month of October. As the regular season progressed and playoff races took shape, teams would choke the life out of games and turn almost every contest into hockey’s version of trench warfare.

Outside of a fleeting attempt at increasing the quality of the game by juicing power-play opportunities and reducing the size of goaltender equipment, the league hasn’t seen a single obvious rule change that would explain a significant shift in scoring. And yet, year after year, we have seen scoring slowly increase league wide.

We can certainly point to other factors that may explain increases in offence: teams have become much more receptive to recruiting outside of North American markets (though this is also true for goaltenders) to widen the talent pool, and have become less inclined to play enforcer and checking-line-type forwards who have historically suppressed scoring.

We also know coaching staffs have become cozier with more optimal offensive strategies. More and more teams are willing to take the risk and carry the puck into the offensive zone because of the higher probability of generating a dangerous offensive sequence; this in stark contrast to the dump-and-chase style of hockey that kept the run of play more conservative in both directions. And on that point about aggression, don’t forget the recent preference to deploying four-forward power-play units. These are, of course, just a few of many theories.

But what may be most interesting – and something that lends itself well to an argument about the growth in skater talent around the league outpacing goaltending talent – is that offence is up in every game state. Teams are shooting the puck more, those shots are coming from relatively more dangerous areas of the ice, and those scoring opportunities are translating into real goals. 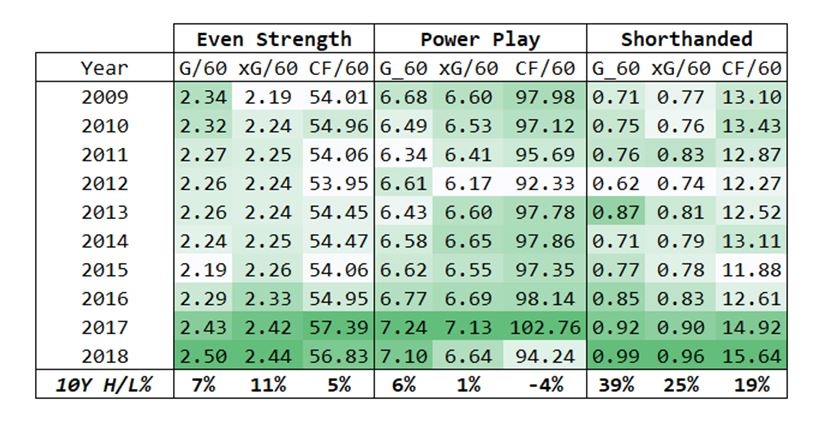 If there is one statistical outlier of the bunch, it’s the fact that power play rate shot attempts haven’t increased in the same way as the other measures. I think part of this is the push to put more shooting talent – in line with the four-forward argument from earlier – around the ice along with increased understanding of the value of holding the zone, as well as penalty-killing units being more aggressive in their own right and trying to counterattack with a bit more frequency.

Absent that, what you see is a relatively similar growth in the game states: more pucks at the net from dangerous areas, more pucks finding the back of the net. While it might be easy to draw a straight line from shooting more to scoring more, the same ‘how’ questions generally exist for shot rate increases as they do for goal rate increases.

But the trend is real, and it’s going to be something to monitor as the 2019-20 regular season begins. Higher scoring games are becoming easier to find, and it’s no longer just an early season trend that dies off when the games get more competitive. If you think offence and entertaining hockey are joined at the hip, this year should be another for the ages.