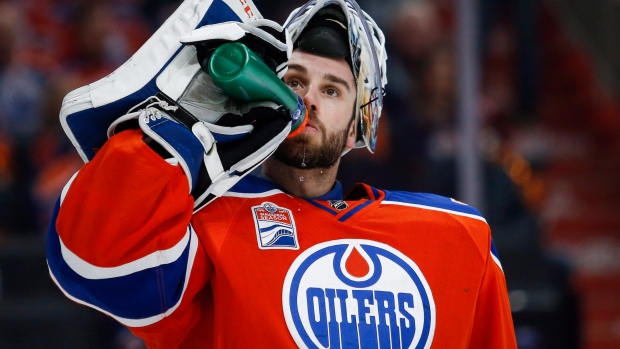 The Edmonton Oilers and Philadelphia Flyers are in discussions on a potential Cam Talbot trade according to TSN Hockey Insider Darren Dreger.

Dreger adds that the discussions could be preliminary, but the two sides are definitely talking.

Word is the Oilers and Flyers are in trade discussions on Cam Talbot. Could be preliminary, but they’re definitely talking.

According to TSN Hockey Insider Pierre LeBrun, a few teams have thought about giving the pending unrestricted free agent a "test drive" for the rest of the season to see if he can regain his form. The Carolina Hurricanes were a team briefly debating whether or not to pursue Talbot weeks ago.

Talbot has struggled so far this season, posting a goals against average of 3.36 and a save percentage of .893. He carries a cap hit of $4.16 million this season and is scheduled to become an unrestricted free agent on July 1.

A few teams have thought about giving pending UFA Talbot a test drive for rest of the season to see if he can find his fastball with them. Carolina was a team briefly debating this internally weeks ago. Philly would be a good fit if Flyers decide to go ahead (mentor to Hart) https://t.co/gFwzd9n6TB

Edmonton committed to Mikko Koskinen as their goaltender moving forward earlier this season when they signed him to a three-year, $13.5 million deal in late January. Koskinen has a 14-12-2 record wiht a 2.86 GAA and a .908 save percentage this season, his first in the NHL since 2010-11.

The team needs to clear $1.2 million in cap space to activate Andrej Sekera from injured reserve. He played his third rehab game Wednesday night for the AHL's Bakersfield Condors and TSN's Ryan Rishaug reports he will play the maximum of five games before being activated.

If completed, the move will represent Keith Gretzky's first trade as interim general manager of the team. Gretzky took over from Peter Chiarelli, who was fired by the team on Jan. 23, two days after signing Koskinen.

Dreger notes that Talbot and Flyers starter Carter Hart have a "good relationship," meaning Philadelphia could be a good fit if the deal progresses.

“He’s a good mentor, a great guy, a good goalie,” Hart said when asked about Talbot on Thursday. The Flyers rookie added he called Talbot for advice on the night before his first NHL start.

The Flyers have been riding the rookie Hart between the pipes since his mid-season call up. He's impressed with a 2.48 GAA and .924 save percentage.

Veteran Brian Elliott was loaned to the AHL affiliate Lehigh Valley Phantoms on Tuesday to begin a "long anticipated" conditioning stint as he works his way back from a lower-body injury. Elliott is on LTIR similar to Sekera and carries a $2.75 million cap hit. Both Anthony Stolarz and Mike McKenna have also seen time in the Philadelphia crease this season.

Philly (26-24-7) will be back in action Saturday afternoon against the Detroit Red Wings.