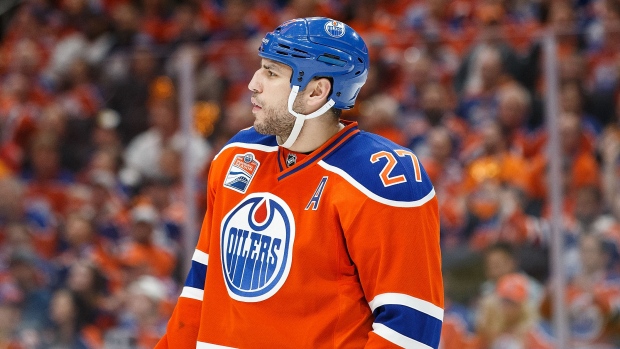 Barring a miraculous second-half turnaround, it looks as if the Edmonton Oilers will miss the playoffs in 2017-18.

There’s no single reason why the Oilers, now 18-22-3, are in this predicament. The team has underwhelmed in every game state. The penalty kill (70.9 per cent; dead last in the NHL) has been a sieve. The power play, considering the weapons available, may be just as bad (16.5 per cent; 24th in the NHL). They are getting just 48 per cent of the goals at even strength, which is 22nd league-wide.

Surely some will blame the coaching here. It’s the first call for blame in every hockey city and Edmonton is no different. The reality is that Todd McLellan is behind the bench of a team that is on pace to drop 29 points in the standings year-over-year. Whether you think McLellan has helped or hurt his team’s cause, he’s going to shoulder a piece of the blame for this season.

But it’s hard to ignore how the head coach has been handcuffed by the decisions made by his front office.

One of the big bets the organization made over the past two seasons is that they could get by with a piecemeal approach on the wing. They traded star left winger Taylor Hall to New Jersey for defenceman Adam Larsson – a trade they felt they had to make to upgrade the blueline. They then traded Jordan Eberle to the New York Islanders for Ryan Strome. That move was, at least in part, designed to free up some cap space – money they would need in the future considering the size of recent contract extensions for Connor McDavid ($12.5 million AAV) and Leon Draisaitl ($8.5 million AAV), among others.

The Oilers have rotated through nine different wingers this season. The average winger in the NHL this year averages about 0.8 goals per 60 minutes across all situations. Keep that in mind when reviewing the below table, which is a quick look at Oilers deployment and production at the winger position this year: 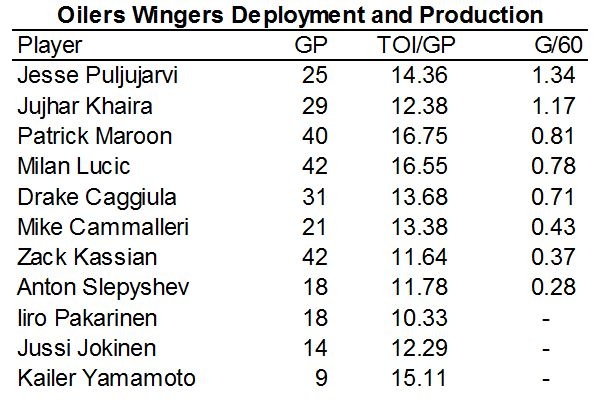 Jesse Puljujarvi has been fantastic and Jujhar Khaira is probably one of the league’s better stories. That said, the fact that the Oilers have only two wingers truly beating the average winger’s scoring production is concerning. Doubly so when you take into consideration that a lot of these guys are getting ample ice time with centres like Connor McDavid, Leon Draisaitl, and Ryan Nugent-Hopkins. The Oilers are as loaded as any team down the middle of the ice, and consequently, the lack of production at the winger position becomes even more curious.

To put some context on the above numbers, I went and looked at how centre/winger production varied across the league. The disparities are significant. Here’s centre production first: 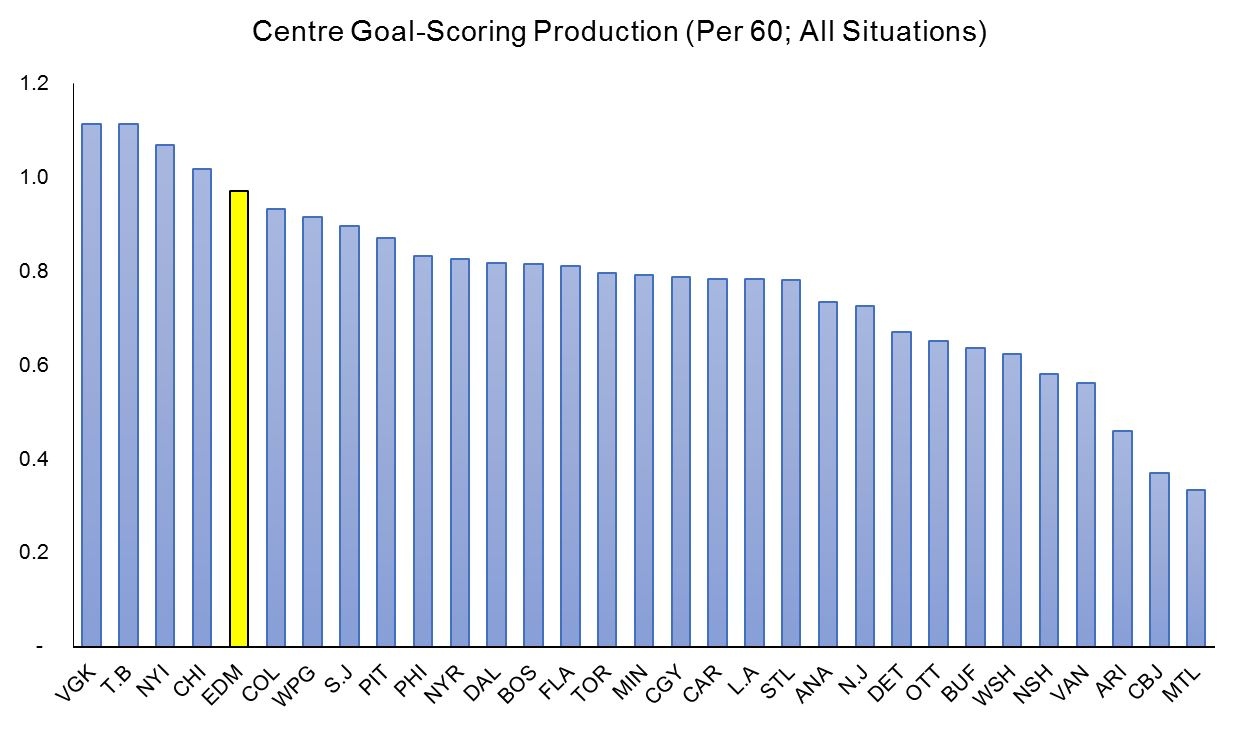 The goal-starved Oilers have received significant offensive production from the middle of their lineup ­– good for fifth best in the league. McDavid (14 goals) and Draisaitl (11 goals) get most of the praise, and understandably so, but the strong rebound year from Nugent-Hopkins (15 goals) has been the nicest surprise for the Oilers this year. Mark Letestu (eight goals) has also provided some scoring punch down the lineup.

But the winger story is materially different. Here, we are talking about one of the least productive units in the entire league: 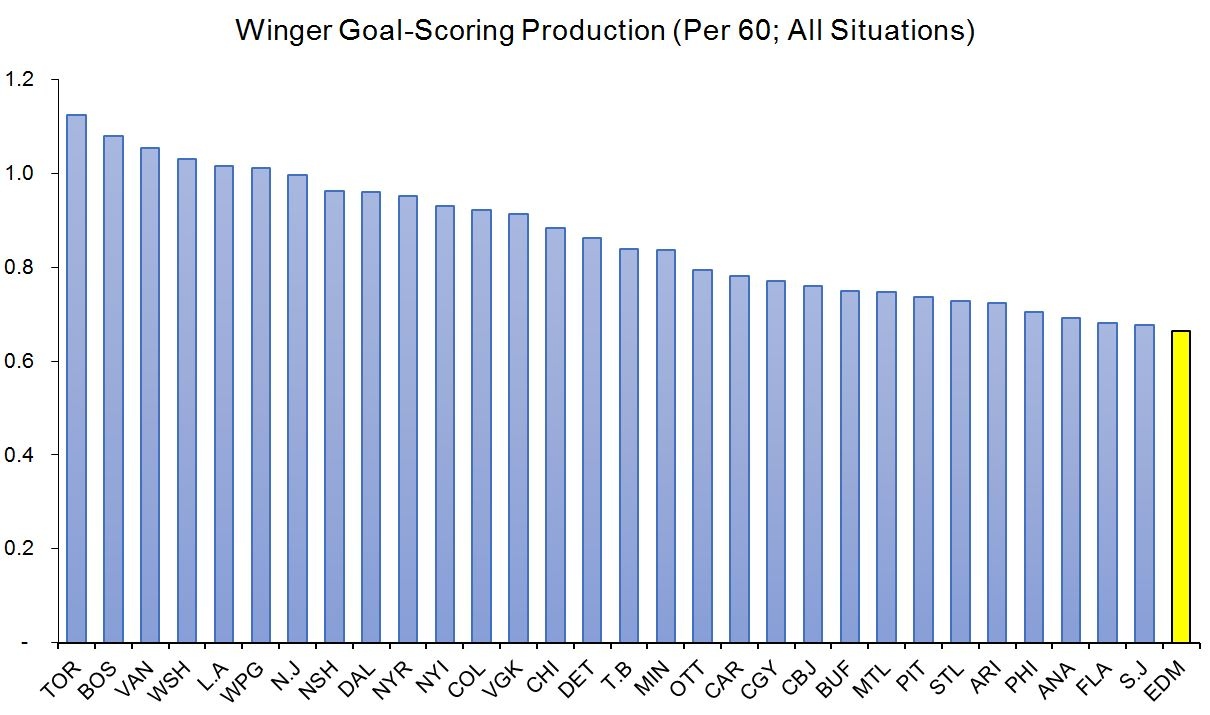 The crazy thing about the Oilers winger story is that Puljujarvi has been electric for the Oilers this year – perhaps their third best skater, all things considered. It goes to show just how little they’ve received from everyone else in the group.

Milan Lucic and Patrick Maroon have taken considerable steps backwards – their slow and methodical brand of hockey fitting like a square peg in a round hole. Both are comfortably on pace to see a significant slice off of their goal-scoring numbers from a year ago. Neither Jussi Jokinen pre-trade nor Mike Cammalleri post-trade has provided any semblance offence. Zack Kassian is on pace for another single-digit goal-scoring year. Iiro Pakarinen and Kailer Yamamoto gave the team zero total goals in 27 combined games.

In the many stories you can write about the Oilers in 2017-18, the failure at the wing has to be near the top of the list. General manager Peter Chiarelli’s gamble to trade off scoring talent on the outside to address other options internally has backfired in a big way. And regardless of how the second half of the season plays, there’s no doubt that the Oilers front office will be back on the trade block for help on the wing come next summer.

Which, again, raises the question: Did the Taylor Hall and Jordan Eberle trades really ever make sense?