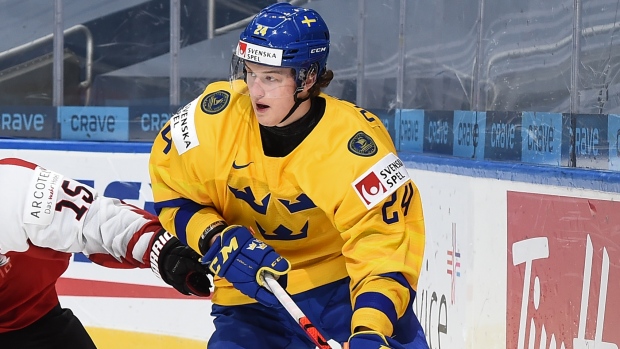 The second edition of our TSN Hockey Mock Draft is still coloured blue and maize early on, with Michigan’s Owen Power, Matty Beniers, Kent Johnson and future Wolverine Luke Hughes all in the Top 9.

The Buffalo Sabres take Power first overall, adding a blueliner with a unique combination of skill, hockey sense and superior size that is comparable to Tampa Bay defenceman Victor Hedman.

Watching Beniers this season with Michigan and with USA Hockey at the World Juniors, I think he’ll give the Seattle Kraken a complete, ‘Mr. Everything’ player who makes his linemates and team better. There’s no part of the game that he can’t excel at.

Hughes, who has committed to play in Ann Arbor next season, has a great brain for the game and is a great competitor. The younger brother of NHLers Jack and Quinn can impact the game with his skating and puck skills and will be a top-pairing defenceman for the L.A. Kings with the potential to be a No. 1 in the mould of Morgan Rielly.

At ninth overall, Vancouver gets Kent Johnson, a centre who played at left wing this year and is adaptable up front. Comparable to Elias Pettersson, he’s got great creativity, imagination and confidence with a quick hockey mind and quick hands.

With two rounds of the Stanley Cup Playoffs complete, 12 more NHL teams are added to our list.

At No. 17, the Winnipeg Jets take defenceman Corson Ceulemans. Reminiscent of Brent Seabrook, he has very good puck skills with the ability to get into the offensive zone, create scoring chances with his passing, and to be threat to score with his shot.

Oskar Olausson, comparable to Colorado’s Mikko Rantanen, goes 19th overall to the Edmonton Oilers. He’s a talented winger with the size, the touch and the intelligence to work alongside very skilled players like Connor McDavid and Leon Draisaitl and can impact the game in multiple ways.

The Toronto Maple Leafs packaged their first-round pick to Columbus for Nick Foligno and I see the Blue Jackets taking Xavier Bourgault at No. 24. The Shawinigan centre, who reminds me of J-G Pageau, is invested in the hard and challenging areas where games are won. He plays with a determined focus and finds ways to positively impact the game.

Check out the rest of our second Mock Draft below. Prospects are listed as a team's 'good fit' and/or the type of player the team may be lacking in its system.

Here is the full order:

The Arizona Coyotes, who had the 11th-best odds in the lottery, were stripped of their first-round pick after the team was found to have violated the league's Combine Testing Policy and is not included.