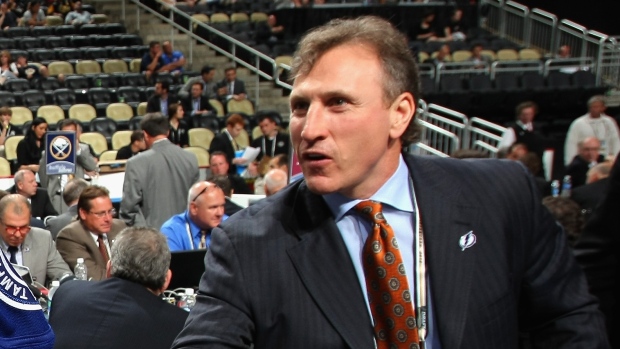 ANAHEIM, Calif. (AP) — Pat Verbeek spent two decades in the NHL as a gritty right wing and 16 more years as a front-office executive preparing for the chance to run his own team.

That's why the new general manager of the Anaheim Ducks believes he's ready to make a championship contender out of a club that's already on the way up.

“I look forward to building this team into a Stanley Cup winner,” Verbeek said.

Ducks owner Henry Samueli introduced the 57-year-old Verbeek on Thursday as the sixth GM in franchise history and the replacement for Bob Murray, who resigned Nov. 10. Murray, who had run Anaheim's front office since 2008, entered a treatment program for alcohol abuse amid allegations of misconduct.

Verbeek realizes he is taking over a team that's already making progress on the path back to contention after missing the playoffs in the past three years. The Ducks (23-16-9) are off to an impressive start this season despite the turmoil in their front office, sitting even on 55 points with the surging Los Angeles Kings (24-16-7) for second place in the Pacific Division heading into the All-Star break.

“It’s going to be easier,” Verbeek said. “Certainly you don’t have to come in there and look to take a long time. There’s good players in the NHL (roster), and there’s also good players in the minors. There’s also players that have been drafted. So there’s lots coming to support the growth of this team. That’s truly what I’m excited about ... (A typical rebuild) takes five years. I’m hoping to shorten that, but that’s kind of the reality of how long it really takes you to be a consistent, serious contender.”

Verbeek will arrive in Orange County on Saturday with just over six weeks left before the trade deadline. He must make quick decisions on the futures of several players — including forward Rickard Rakell and defensemen Hampus Lindholm and Josh Manson, who will all be unrestricted free agents in the summer unless they're re-signed or traded.

Verbeek believes he has more than enough time — “quite a bit of time, actually” — to decide what to do with the Ducks' veteran core. He said Samueli has given him clearance to do whatever is necessary to keep Anaheim moving forward.

“I would look at this as being in the middle of a rebuild,” Verbeek said. “We have strengths. We also have weaknesses, so the goal is going to be to make sure we keep building on those strengths, and then start to eliminate the weaknesses.”

Ducks coach Dallas Eakins' three-year contract is also up this summer. Verbeek said he has only briefly spoken to Eakins so far, but they will meet this weekend.

Murray stepped away after being accused of repeated verbal abuse of employees. He had the third-longest tenure of any active NHL general manager when he resigned.

Faced with a GM search in the middle of the season, Samueli assembled a committee including Ducks Hall of Famers Scott Niedermayer, Paul Kariya and Teemu Selanne.

Samueli evaluated internal candidates for the job, including respected assistant GM Martin Madden, but ultimately chose to go with Verbeek's outside experience and pedigree of success.

“The final decision was really challenging, but there were five finalists in the group,” Samueli said. “Pat really checked more boxes than anybody else. He had a broader set of skills and came from a great set of organizations with a strong winning culture, which we had as well. He matched our values, our ethics, our vision, and we reference-checked that very carefully throughout the league to make sure he was going to be a match for our group.”

“I'm hoping I can do the job that (Yzerman) did in Detroit and Tampa and build the Anaheim Ducks into a contender,” Verbeek said.

As a player, Verbeek earned two All-Star selections and won the Stanley Cup with the Dallas Stars in 1999. The right wing with 2,905 career penalty minutes was famously nicknamed “The Little Ball of Hate." He served as the Hartford Whalers' captain for four seasons during a career that ended in 2002.