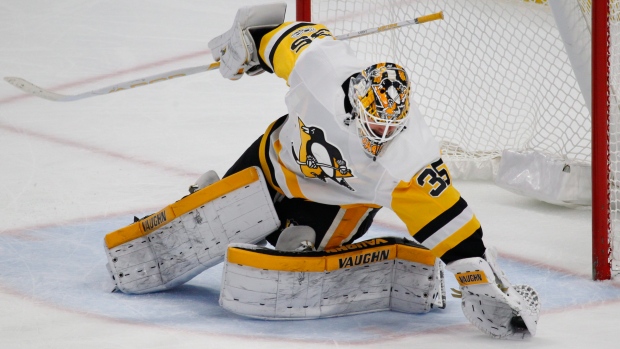 Pittsburgh Penguins All-Star goalie Tristan Jarry hasn't played since April 14 due to a lower-body injury, but was back on the ice for the first time on Saturday ahead of the team's optional skate.

Tristan Jarry working on the ice before practice…. -DP pic.twitter.com/iZ2Z8coKl7

The 27-year-old Jarry was named an All-Star for the second time in his career this season, posting a 34-18-6 record with a 2.42 goals-against average and a .919 save percentage with four shutouts over 58 games before going down with the late season injury.

The Penguins, who are tied with the New York Rangers 1-1 in their first-round series, lost Casey DeSmith for the rest of the playoffs after he had core muscle surgery on Friday.

DeSmith left Game 1 after starting in place of Jarry. Penguins head coach Mike Sullivan did not have a definitive update on Jarry Friday, stating the goaltender is continuing to rehab.

Louis Domingue, who will be in the net for Saturday's Game 3 in Pittsburgh, appears set to serve as the Penguins starter until Jarry returns. He went 1-1 in the regular season with the Penguins, posting a .952 save percentage and a 2.02 goals-against average.