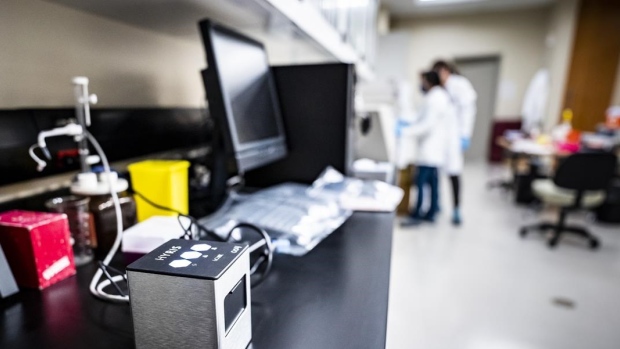 CALGARY — The men curling in the Canadian championship don't much care there's a small, silver box processing their nasal and throat swabs in a matter of hours, but the result it produces matters deeply to them.

A portable rapid-test unit the size of a tissue box not only greased the wheels for the curling bubble in Calgary, but it's also used in other sports across Canada to test for the COVID-19 virus.

The Canadian Olympic Committee and Canadian Paralympic Committee purchased 17 Hyris Bcube units from Songbird Life Sciences in Guelph, Ont., and tasked Own The Podium with their deployment.

Eight units at the Canadian Sport Institute Calgary churned through tests on opening day of the Tim Hortons Brier to get the men on the ice that night.

"We were … checking our emails every five minutes, hitting the refresh button, waiting to get that negative test, so we could order some food, maybe get together and have a team meeting," New Brunswick skip James Grattan said.

Testing for the virus at the Brier is a hybrid of molecular PCR tests processed in labs and rapid antigen tests with Bcubes.

Molecular tests by DynaLife, which was the lab employed by the NHL for its playoff bubble and by Hockey Canada for the world junior men's championship in Edmonton, can take about 24 hours to process.

The curlers underwent that type of test 72 hours before departing for Calgary and also upon arrival.

After a 24-hour quarantine in their individual hotel rooms awaiting results, they were let out only to get on the ice and train before returning to their rooms.

A second negative test required to mix with teammates and start the event would have posed a time crunch if not for Bcube's quick-turnaround capabilities.

"If everything goes really, really well, you can get results within two hours, but I'd say on average we get results back in about three hours once the swab comes into the lab and you start the analysis process," said Jason Poole, CSI Calgary's senior director of performance services.

CSI Calgary staff are trained to analyze Bcube results in-house, so that reduced the amount of time Brier participants spent alone in their hotel rooms awaiting a test result to start curling.

"If we had to rely on the PCR test, we would have had to bring in the players a day earlier to have everybody ready to curl Friday night," Curling Canada event operations director Danny Lamoureux said.

"For us, one day is $10,000 (for the field) in a hotel room. Doing it this way was economical and we didn't have to put the players through an extra day of hard quarantine.

"The sooner I can get them out of quarantine, the happier they are."

Including the Canadian women's championship that kicked off Calgary's curing bubble in February, Lamoureux says no one has tested positive for the virus so far.

The Bcube's portability is an asset in a country as geographically vast as Canada.

COC chief sport officer Eric Myles says the money came from the $5 million the federal government gave to high-performance sport last year to cover the extra costs of returning to training and competition in a pandemic.

The units are based in a Victoria warehouse from which OTP director of sport science, research and innovation Dr. Andy Van Neutegem distributes based on need.

The Canadian junior men's hockey team had units for its selection camp in Red Deer, Alta., in November.

The national women's and para hockey teams had access to CSI Calgary's Bcubes for January camps.

The Canadian bobsled team availed themselves of the "lab in a box" in Ottawa before departing for Europe in December, and a unit is headed to Florida with the women's softball team.

CSI Ontario in Toronto has two units. They're also getting deployed to national wheelchair rugby and basketball camps in Kingston, Ont.

A drawback of rapid antigen testing is a result can be inconclusive, which means a swab sample must be processed again to double-check.

Testing is just one virus-avoidance tool in a sports environment, but it is a foundational one.

"The provincial government, and certainly the federal government, when they review all of these applications as they did for the NHL, and as they did for the world juniors, pretty much the entire thing was predicated on testing and then credible, robust mechanisms on hand washing, distancing, social isolation in hotels, controlling people coming in and out," Van Neutegem explained.

"To know the veracity and efficacy of your interventions, you have to do testing."

The men competing in Calgary had their nasal passages and throats swabbed four times in a 10-day span.

Northern Ontario skip Brad Jacobs doesn't concern himself with what happens to his sample once it leaves him.

"I care zero about what goes on behind the scenes. I know nothing about it and that's why we leave it to the professionals," he said.

"I will say on the nose swab they're a little more aggressive out here in Alberta than they are in Ontario."

"Especially when your nose is shaped like mine, you'd rather not have to try and find a way back there, but just to be able to play and make this event happen, it's definitely worth it," Casey said.

"It's two seconds of minor torture to get days of fun."

This report by The Canadian Press was first published March 11, 2021.