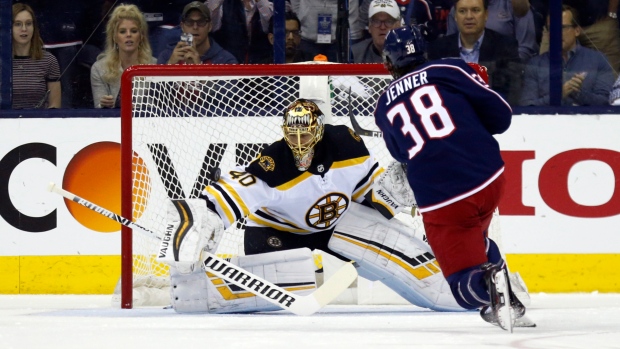 COLUMBUS, Ohio — Boston's stars were going to be kept off the scoresheet in this playoff series for only so long.

David Pastrnak, Patrice Bergeron and Brad Marchand had combined for 260 points in the regular season, but had been neutralized by the Columbus Blue Jackets through the first three games of their Eastern Conference semifinal series. The only point among them was a goal by Pastrnak in Game 2 that was a deflection off his skate.

All three top-liners contributed Thursday night as the Bruins beat the Blue Jackets 4-1 to even their series at two games apiece. The best-of-seven set moves to Boston for Game 5 on Saturday.

Bergeron had two goals, Pastrnak had a goal and an assist and Marchand picked up a helper for the Bruins.

"I don't think they got too many rebound opportunities," Rask said. "That's how they've been scoring. They were trying to play down low, pushing more pucks in there but I thought we protected the house well, (I) saw every puck. That was huge."

Artemi Panarin scored for Columbus on a blown call by the officials , and Sergei Bobrovsky, who has been spectacular in the post-season so far, had 41 saves but was beaten on long shots by Pastrnak and Bergeron in the first period.

Early in the first, Pastrnak was flattened by a huge hit from Columbus defenceman Adam Clendening. Around 25 seconds later, Pastrnak rifled a shot past Bobrovsky from the left circle to get the Bruins on the board.

Columbus then got a gift. After the puck appeared to go into the netting and back onto the ice behind Boston's goal, Panarin ended up with it and scored from close range. The Bruins protested, but the play was not subject to review because the scoring player, Panarin, wasn't the first to possess the puck off the net.

"You play through it. That's hockey," shrugged Marchand. "A lot of calls are missed — that's part of the game. That's why they shouldn't have the review on as much as they do. Play through that stuff."

After a scoreless second, Kuraly put back a rebound off the end board 8:40 into the final period. Bergeron picked up his second goal off a rebound with 2 1/2 minutes left in the game.

Columbus gave away six power plays and Boston scored on two of them.

"Their top guys score some goals on the power play, we gave them a chance to get going now by just sitting in that box too much," Columbus coach John Tortorella said. "That's the hard part of this game here tonight."

Overall, Tortorella and Blue Jackets players are happy with how they are playing entering Game 5.

"It's the series, man," Blue Jackets captain Nick Foligno said, "It's 2-2, and this is what we thought it was going to be, so I'm not too concerned. We obviously need to tighten up in certain areas, make sure our (penalty) kill is a little bit better."

NOTES: Boston F David Backes was back in the lineup after being a healthy scratch since Game 5 of the first round against Toronto. Karson Kuhlman went to the bench. ... Columbus F Riley Nash was out with an injury, replaced by rookie Alexandre Texier. Nash had taken some hard hits in the first two games. ... Boone Jenner was awarded a penalty shot in the first period after Marchand tripped him on a breakaway, but Rask stopped it. ... The crowd of 19,431 was a Nationwide Arena record.

The series moves to Boston for Game 5.