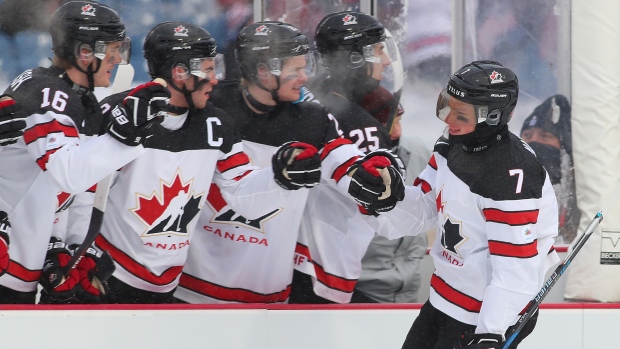 It appears Cale Makar's NHL debut will have to wait until at least 2019.

The Colorado Avalanche prospect has decided to return to the University of Massachusetts-Amherst for his sophomore season, according to Adrian Dater of BSN Denver.

Makar, selected fourth overall in last June's draft, scored five goals and posted 21 points in 34 games as a freshman this season. He also won gold with Canada at the 2018 world juniors, recording three goals and four assists over six games, and was named to the All-Tournament Team along with projected 2019 first-overall pick Rasmus Dahlin.

The 19-year-old defenceman was reportedly offered a spot on Canada's roster for Pyeongchang 2018, but respectfully declined.

Makar shot up draft boards during the 2016-17 season, scoring 24 goals and posting 75 points in 54 with the Brooks Bandits of the Alberta Junior Hockey League.

The Calgary native was ranked 11th in Craig Button's list of the top 50 NHL-affiliated prospects in February.