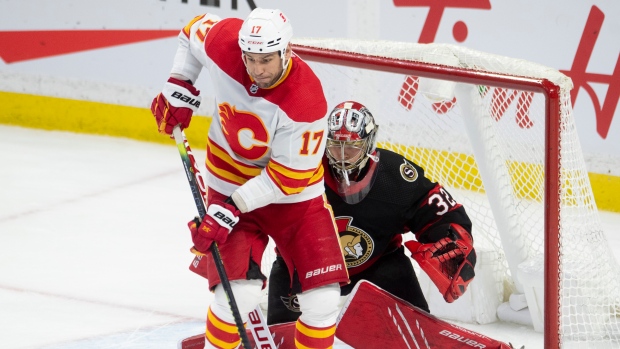 Gustavsson made 28 saves and Chris Tierney scored the winning goal as the Senators improved to 5-2 against the Flames this season with a 3-1 victory Wednesday.

"It was like a normal game for me today," said Gustavsson, who led the Senators to a 2-1 win over Calgary in his first career NHL start Monday. "It felt like I did the hard part the last game, so now it's just start and play."

Rookie Josh Norris scored his third goal in four games for Ottawa (12-20-3), which has earned at least a point in five straight games (3-0-2). Nikita Zaitsev iced the game with an empty-net goal.

Captain Mark Giordano scored his fifth goal of the season for the Flames (15-16-3), who have lost three straight. Goaltender Jacob Markstrom made 28 saves.

Both goalies looked sharp while keeping the scoring down in what was a fast-paced game. Gustavsson in particular made some impressive stops over the first two periods to keep the Senators in it before they took over with a dominant third period.

"We're all really happy for (Gustavsson)," Norris said. "He's such a nice guy. He comes to work every day and loves being at the rink, so it's good to see him have success."

"He looks so calm, and as a player you really feed off of that," Norris added.

Ottawa forward Drake Batherson had a fantastic chance to open the scoring eight minutes into the second period but he rang his shot off the crossbar.

However, the Flames struck first shortly after killing a tripping penalty to Dillon Dube when Giordano's shot from the point clipped Senators forward Alex Formenton and beat Gustavsson.

Shots were 21-18 after two periods in favour of the Flames.

Ottawa tied the game 4:48 into the third when Evgenii Dadonov won the puck on the forecheck behind the Calgary net thanks to some strong forechecking. Dadonov put the puck in front for Norris, who beat Markstrom for his eighth goal of the season.

Later in the period the Senators hemmed the Flames in their own zone and were rewarded when Tierney scored to put the Senators up 2-1 at the 12:01 mark.

After fatigued Flames defenceman Noah Hanafin — who played a three-minute 12-second shift thanks to Ottawa's pressure — failed to clear the puck out of Calgary's zone, Tierney fired a rebound off a Thomas Chabot shot past Markstrom for his fifth goal of the season and second in two games.

"You sling it on net a couple of times, and if you can hang on to it long enough you can wear the other team down," Senators head coach D.J. Smith said. "I thought, eventually, we did that."

The Flames, who went 13 minutes without a shot at one point in the third period, have scored just twice over their last three games.

"That's just the way the puck possession was, and we weren't as good on our recovery or our management part of it," Flames head coach Darryl Sutter said. "It's so easy for everybody to dissect it, but when you're not scoring, those wee little games within a game are magnified."

The Senators next host the Toronto Maple Leafs on Thursday. Calgary hosts Winnipeg on Friday in the first of three straight games against the Jets.

Notes: Formenton, called up from the American Hockey League's Belleville Senators to replace the injured Austin Watson, played his NHL game since Nov. 1, 2018. ... Calgary is a perfect 12-for-12 on the penalty kill over its past four games. ... The Senators power play has just three goals in its past 31 chances. ... Chabot logged 28:03 of ice time, ending his streak of playing 30-plus minutes at three games.

This report by The Canadian Press was first published March 24, 2021.