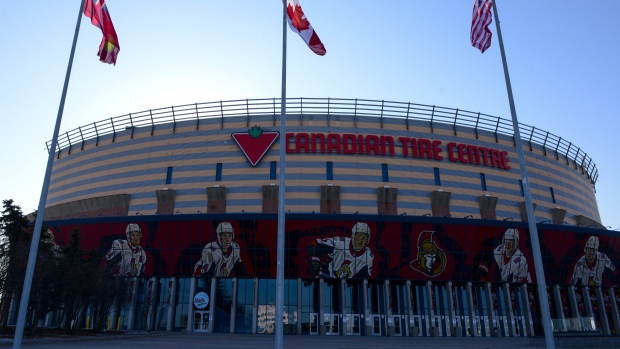 OTTAWA — The Ottawa Senators say another one of their players has tested positive for COVID-19, bringing the total number of known cases in the NHL to two.

The team announced their second case in a statement Saturday, four days after announcing its first positive test result.

The Senators did not name the player, but said he was part of their recent California road trip that included games in San Jose, Anaheim and Los Angeles before the league postponed its season last week due to the novel coronavirus outbreak.

"The Ottawa Senators' medical team is actively monitoring players and staff and following all appropriate and professional guidelines to help ensure the health and safety of our employees and the greater community," the team said in the statement.

The team said 52 people, including players, staff, media, guests and flight crew, were on the trip.

Eight have been tested, with two positive results received. Results have yet to come in for the other six, who were tested on Wednesday, Thursday and Friday.

The team said the other 44 people on the trip "have shown no symptoms," but they have each been instructed to self-quarantine since March 14.

"You don't want to see it when it happens, but in the current atmosphere, I think we've all been assuming that there would be some players that sooner or later would test positive," NHL Players' Association executive director Donald Fehr said in an interview with The Canadian Press on Saturday. "Hopefully he's not significantly ill and (will be) on the road to full recovery soon."

The Senators announced the initial case Tuesday — the first positive COVID-19 test for an NHL player. The team also did not identify that player, but said at the time that he had mild symptoms and was in self-isolation.

"To be fully transparent with our fans, and stakeholders we will continue to provide periodic updates as appropriate, while maintaining the privacy of the individuals impacted," the team said Saturday.

The coronavirus has wreaked havoc in the sports world, with leagues cancelling or postponing their seasons after the World Health Organization labelled the outbreak a pandemic on March 11.

Ten NBA players are known to have tested positive for COVID-19, though only five of those have been publicly identified.

New Orleans Saints head coach Sean Payton announced this week he had also tested positive for the coronavirus, the first known case among the NFL.

The CFL's B.C. Lions said late Friday that a member of their football operations department had also tested positive for COVID-19. The Lions did not release the name of that employee.

-With files from Joshua Clipperton in Toronto

This report by The Canadian Press was first published March 21, 2020.