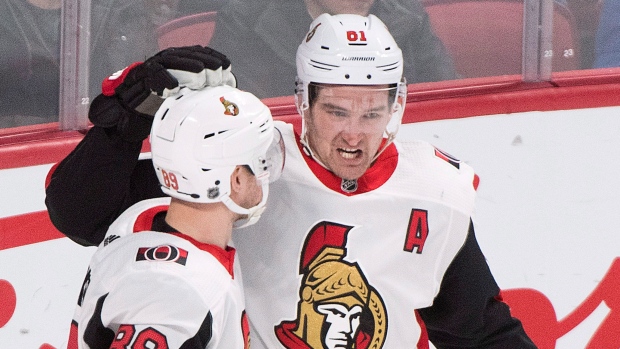 Mark Stone is on the move.

Brannstrom, Lindbergh and Dallas Stars 2nd round pick in 2020 to Ottawa for Mark Stone. Tough to lose a player like Stone, but that’s a home run for Pierre Dorion and the Sens.

Following the deal, Stone said live on TradeCentre that he and the Golden Knights have agreed to an eight-year extension. TSN Hockey Insider Bob McKenzie reports the deal is for $9.5 million per season, but the deal cannot be completed until Friday.

Prior to the deal, the 26-year-old sat atop the Senators with 28 goals and 62 points while playing 58 games this season. His goal total this season is a career-high.

The move reunites Stone with Golden Knights assistant general manager Kelly McCrimmon, who had him in Brandon of the Western Hockey League.

Stone is the third major domino to fall in Ottawa over the last couple days, with forwards Matt Duchene and Ryan Dzingel heading to the Columbus Blue Jackets in separate deals.

The 19-year-old Brannstrom has seven goals and 21 assists in 41 games so far this season for the AHL's Chicago Wolves. He was selected in the first round (No. 15 overall) by Vegas in the 2017 NHL Draft.

The Golden Knights have lost three games in a row and will be back in action Tuesday night as they host the Dallas Stars, while the Sens will host the Washington Capitals.