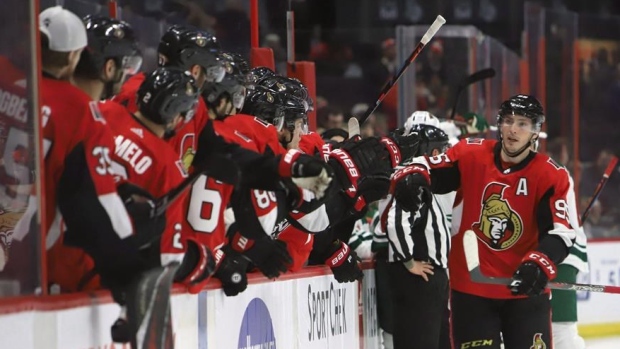 TORONTO — Every time Matt Duchene enters an NHL arena, he leaves all the trade talk buzzing around him at the door.

The 28-year-old Senators forward has been the subject of trade speculation as Ottawa embraces a rebuild that would be accelerated by moving Duchene, Ryan Dzingel or Mark Stone before the Feb. 25 trade deadline. But Duchene, who was traded to the Senators by the Colorado Avalanche during the 2017-18 season, finds it easy to keep the trade talk off his radar.

"If I've said it once, I've said it 100 times, this is probably the greatest group of guys I've played with in terms of our cohesiveness in the locker-room and morale in here," said Duchene on Wednesday in the visitors locker room at Toronto's Scotiabank Arena. "It's just been a pleasure coming to the rink every day, not just to see the guys in here but the people in the organization, trainers, coaches, everything.

"That makes it really easy to indulge in it and not worry about the other stuff. That's the way it's been all season."

Duchene, Dzingel and Stone will all become unrestricted free agents this off-season. The trio also lead the Senators in points this season. Heading into Wednesday night's game in Toronto, Stone had 22 goals and 29 assists, Duchene had 21 goals and 27 assists, and Dzignel had 20 goals and 19 assists.

"I'm concentraing on the game," said Duchene, whose agent Pat Brisson has also spoken with Senators GM Pierre Dorion about a contract extension. "I've addressed everything a couple of times already. Today's a gameday against one of the best teams in the league (Toronto), that's all I'm really worried about.

"The rest can go when it happens or I'll deal with it when it needs to be dealt with."

Some of the talk in the visitors' locker room echoed what was being said down the hall as the Toronto Maple Leafs answered questions about Auston Matthews's new five-year, US$58.17-million extension and Mitch Marner's own pending restricted free agency.

"I don't deal with it," said Boucher. "In our room we don't talk about that. That's outside the realm of what I have to do and my job is to focus on the players that are here, now, today, against the Leafs, and that's all we talk about."

However, Duchene did suggest that Matthews might be affected by having the hefty contract signed.

"I'm sure he'll have a little jump in his step," said Duchene. "Or maybe a little less from carrying around that contract on his back.

"It's well deserved, he's an outstanding player, one of the best scorers in the game and it's big for the Leafs to get him locked up."