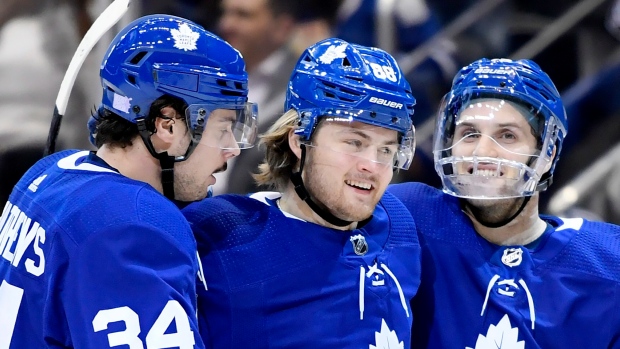 TSN Toronto reporter Kristen Shilton checks in daily with news and notes on the Maple Leafs. The team held a 1:15pm/ct practice Wednesday at MTS Centre in Winnipeg ahead of Thursday's game against the Jets.

If his first few weeks on the job are any indication, Maple Leafs head coach Sheldon Keefe doesn’t believe in standing pat offensively. Instead Keefe just follows his instincts, like the one that said putting Auston Matthews with Mitch Marner and William Nylander with John Tavares would help create a dynamic top-six for Toronto.

“It’s more just a hunch,” Keefe said after the Leafs’ practice on Wednesday of what drew him to the new combinations. “And every time you make one move it kind of has a trickle-down effect. We’re fortunate we have a lot of good players that we can experiment with some different things and they all seem to work.”

Part of that unit with Tavares and Nylander has been Alexander Kerfoot, moved off his usual post at centre to play on the wing. Keefe made the decision in response to Ilya Mikheyev missing the next three months with ligament damage, but like everything Keefe does, there are more layers to it than that.

“It's an experiment, one more out of necessity, and we've liked how it looks so far,” he said. “We had intended on having Pierre [Engvall] play the middle on the third line, and then didn't like how that looked early and put [Jason] Spezza there and that's got some traction. But the season brings a lot of different things - different opponents, different challenges, injuries, players playing well, players not playing well. So the more of a sample we have with different combinations I think can serve us well there.”

Kerfoot has skated on the wing previously, so when Keefe approached him about moving over last week, he was prepared to make the necessary adjustments.

“As a centreman, you're engaged all game long, and when you're in the d-zone, you're always on a guy fighting for loose pucks,” he explained. “Sometimes when you're a winger, you can be stagnant for a little bit longer. It's just staying in the right spot and being focused on whatever your responsibility is and then you've got obviously a little bit more leeway to make offensive plays and you can spend a little bit more time up ice.”

While it’s only been a couple of games since the trio started getting acclimated, Tavares has seen positive strides made already.

“I think we're just trying to be responsible in all three zones and obviously we want to be productive and make a difference in the game,” he said. “We all think the game pretty well. We’re playing off each other's strengths and having a good feel for one another so when we get opportunities it's not trying to do too much, it's get the puck to the net, find ways to find rebounds or second opportunities and continue to break your opponent down and keep generating and have good puck possession, so we'll just keep building off it.”

Since Keefe played off his hunch and moved Nylander to Tavares’ flank, the winger has become one of the team’s most dominant players, producing 11 points (six goals, five assists) in his last six games – including five points on the power play - and looking every bit the superstar forward.

“He's been really good here now,” Keefe said. “Whether it's him just finding his own game and being comfortable, or the switch in the lines and that chemistry there, or the presence of John on his line, [he’s been good]. And his presence on the power play, where I think he's gotten a lot more comfortable with his role that he's playing there [at the net front], which has been a new role for him. All those sort of things seem to be falling into place and he's been excellent.”

It was just in mid-December that Keefe lamented the inconsistencies to Nylander’s game, and even limited his shifts in games where Nylander wasn’t engaged defensively. But those speed bumps feel a long way off from Nylander now.

“I think I'm just skating a lot,” he said. “Obviously the power play has been clicking too so that gives you some confidence. We've playing a lot in the o-zone, so that makes the game easy. I think it's just been bounces and stuff have been going my way too so it's been going pretty good.”

Tavares had shared the ice with Nylander on the power play before, but the extra time at 5-on-5 has opened his eyes even further to what makes Nylander special. While it’s never a sure thing that players will click, Nylander described his chemistry with Tavares as “instant,” and the Leafs’ captain felt similarly.

“Seeing how quick those decisions have to be made [with the puck] and sometimes not even taking a look, just having a feel for where everyone is, it's really impressive,” Tavares said of Nylander. “And I think he's very underrated with how strong he is on the puck. He can hold on to it for very long periods of time with a lot of pressure on him. I think we just feed off each other well so we’ll try to continue to improve and find areas where we can attack the opponent. It’s definitely nice when you get put together and you have some good results early.”

That has included individual returns for Tavares as well, who has nine points (three goals, six assists) in his last six games. As their unit continues to hum along ahead of Thursday’s tilt with the Jets, Nylander is determined to guard against complacency, especially for himself.

“It's nice when that [success] happens, but you always want to keep going,” he said. “You never want to be satisfied with that so we just want to keep working hard and battling.”

When a team is practicing and playing with as much boisterous enthusiasm as the Leafs are lately, it’s not all that difficult to unearth the reason why.

“It’s the obvious answer, but I think that is the answer – winning,” Keefe said. “When you're losing, it's harder to feel that way.”

Toronto finished out 2019 with a 4-1 victory over Minnesota, marking the team’s seventh win in eight games and eighth straight contest where it has earned at least one point. When it comes to breeding confidence, there’s no substitute for success – or extra team bonding, like the Leafs have had on their many recent road trips.

“We definitely enjoy being around each other and coming to the rink every day, going to work and trying to get better,” Tavares said. “But no question I think we understand the attention to detail and how difficult things are even when they are going well. We’ll just continue to challenge ourselves to be better and to keep things going in the right direction and getting good results and building momentum, and try to come with the right approach, the right attitude every day.”

Tavares noted how the season didn’t start well for Toronto, and that it’s been a point of emphasis for the players to fix mistakes on the ice that lead to that. From Keefe’s perspective, he also had another job to do in taking over coaching responsibilities that would allow the Leafs to relish in hockey again.

“I tried to ease the pressure a little bit by just allowing them to be themselves and have fun and try to keep things in perspective all the time,” he explained. “The team is playing well, it's a new year, the first of January, which is probably not the most ideal day to come to the rink and practice but we're here, it's important for us to get some work done but do it in an environment where the players can enjoy themselves and still leave the arena feeling like they accomplished something.”

“We walk around and have fun and that's obviously very important,” surmised Nylander. “I think that's a key to having success. Everybody here is having fun with each other.”

Keefe had said before the Leafs’ current two-game road swing that he was comfortable traveling with no extra forwards and seven defencemen. But that feeling changed when Engvall exited Tuesday’s game, and Keefe was briefly unsure if he would be able to return due to injury.

Engvall did wind up finishing the game, but the team still opted to recall forward Mason Marchment on Wednesday to join the group in Winnipeg in case there are any unforeseen setbacks.

“We wanted to have an extra body around here,” Keefe said. “We had some guys get a little banged up [on Tuesday] so just want to make sure everybody's good. We haven't made any decisions with our lineup here [against the Jets]; we'll just see how everybody is [on Thursday] and go from there.”

Keefe acknowledged it has been a “long journey” for Marchment getting to this point in his career, from suffering through injuries to fighting for playing time. So far this season, he has only appeared in 11 AHL games due to an earlier shoulder surgery, and has produced four points (two goals, two assists).

“He's put in a lot of work on his game, on his body and he's battled injuries,” Keefe said. “And this season again the same thing with a second surgery on the shoulder [after a previous operation last winter]. I've been really impressed with how he's worked. Through my time with the Marlies in the early goings of this season, his attitude and the work that he put in to have to recover from a second surgery within the same calendar year was tough and he handled it very well and he's put himself in the position to get this call.”

Even if Marchment doesn’t make his NHL debut during the recall, Keefe hopes he will gain an appreciation for what life is like at the sport’s highest level. It’s something Keefe did earlier this season with Adam Brooks, and found it was helpful for him later transitioning into a role with the team.

“That's part of what I've been trying to do here is to try to expose as many people as possible to our program,” said Keefe. “Part of getting an opportunity is to be prepared for it when it comes so even if they don't get in the lineup we think just having them around gives them the chance to be comfortable with the staff, with their teammates, with what we're doing with the NHL and everything that the NHL brings, so that when they do get on the ice, they feel more comfortable.”